A protein, called cryptochrome, helps birds traverse such great distances via magnetic field, demonstrated a new study by physicists. They have established that birds can sense the earth's magnetic field and use it to orient themselves. This finding could have broader implications for physicists hoping to extend coherence for more efficient quantum computing.

Researchers are exploring one possible explanation- a magnetically sensitive protein called cryptochrome that mediates circadian rhythms in plants and animals. Exposure to blue or green light triggers electrons in the protein to produce pairs of radicals whose electron spins respond to magnetic fields.


Behavioral experiments have revealed that even subtle disruptions to the magnetic field can impact birds' ability to navigate. During the study, robins were placed in wooden huts on campus at the University of Oldenburg in Germany. Without supplementary visual cues like the position of the sun in the sky, the birds struggled to navigate. The birds were only regained their ability to orient themselves when the huts were covered in aluminum sheeting and electrically grounded, blocking external oscillating electromagnetic noise but not the earth's static magnetic field.


The researchers concluded that even low-level electromagnetic noise in the frequency range blocked by the aluminum screens, probably coming from AM radio signals and electronic equipment running in buildings, somehow interfered with the birds' magnetic orientation ability. One explanation could be that the electromagnetic noise has quantum-level effects on cryptochrome's performance. This would suggest that the radical pairs in cryptochrome preserve their quantum coherence for much longer than previously believed possible. 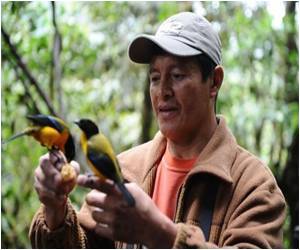 Study: Urban Birds 'Stressed By Human Activity'
According to a new study from scientists at Boise State University, even species considered "tolerant" of human activity might be adversely impacted by human disturbances.
READ MORE

Female Great Tit Birds Remember Positions of Cached Food Much Better Than the Males
When it comes to remembering where a tasty titbit was left, female great tit birds are miles ahead of their male counterparts.
READ MORE 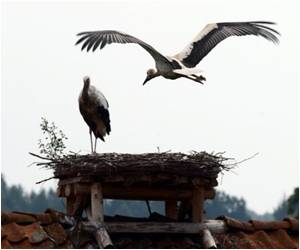 Angry Birds Swoop to Protect Young in Oz
Australians are seen wearing bicycle helmets with spikes on top or caps that have images of eyes on their back each year during the spring season.
READ MORE