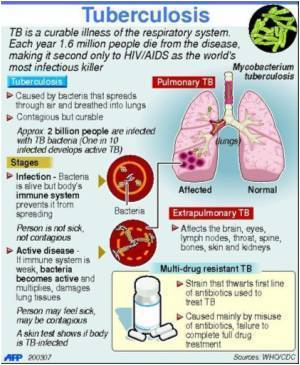 Researchers from the National Heart and Lung Institute at Imperial College London have identified a new protein that could be targeted by a new vaccine that could be used to increase the effectiveness of preventive vaccines for tuberculosis.

The only vaccine currently used to fight TB, the BCG vaccine, is not very effective and a number of studies have taken place to discover a more effective weapon against the disease.

The researchers, led by Professor Ajit Lalvani, identified a new protein, EspC, and found that it triggered a stronger immune response than any other known molecule.


"We've shown that EspC, which is secreted by the bacterium, provokes a very strong immune response, and is also highly specific to Mycobacterium tuberculosis. This makes it an extremely promising candidate for a new TB vaccine that could stimulate broader and stronger immunity than BCG", Professor Lalvani wrote in his report which will be published in the Proceedings of the National Academy of Sciences.