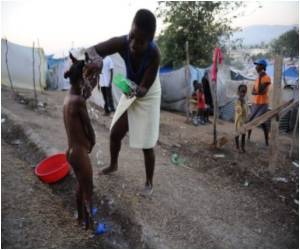 Ms Alexandra Cohen, an eighth grader from Montreal, Canada has made a passionate plea for effective measures to protect Haitian women and children from sexual violence.

In a letter to the Montreal Gazette, the girl recalls a gruesome report by the UN that said in 2008 almost half the girls and young women living in poverty in Haiti had been raped. UNICEF estimated that 100,000 Haitian girls are currently held captive as sex slaves.

International Women's Day 2009 will focus on fostering a genuine partnership between men and women to eliminate violent atrocities against women and girls.

"The incidence of rape has more than doubled since the earthquake, particularly in the camps where the threat of sexual attacks is constantly looming. Offenders are rarely prosecuted, and the victims are shamed, ignored and intimidated. Often they are subject to retaliation by their attackers if they report the rape. Since there is no enforced punishment for rape and sexual slavery in Haiti, the problem continues to escalate."


Urging fellow readers to mount a sustained campaign in support of the hapless girls, Cohen wrote movingly, "These women and children have no voice, but each of us can help speak for them so that Haiti is rebuilt as a safer place for everyone."

The World Food Program is to launch a food surge in Haiti from Saturday to boost rations for nearly two million people in the impoverished quake-torn country, a spokeswoman told AFP.

Thousands attended memorial services at Port-au-Prince, the Haitian capital. on the first anniversary of the devastating earthquake  that struck the poor Caribbean nation at 4:53 p.m. a year ago, killing around a quarter of a million people.

Papal envoy to Haiti led the memorial service at the ruins of the National Cathedral in the wrecked capita. Many other religious leaders, government officials and foreign dignitaries too attended the service. Local mourners stretched out their arms, calling out aloud the names of dead loved ones and imploring God's help.

Despite an outpouring of solidarity for Haiti from around the world, billions of dollars of aid pledges and a huge ongoing humanitarian operation, ordinary Haitians say they are still waiting to see a positive impact in the Western Hemisphere's poorest state.

"If the reconstruction were serious, the mass would be happening inside the rebuilt church," Carla Fleuriven, a 19-year-old mother of three dressed in a white skirt and blouse, told Reuters outside the Cathedral.

On Jan. 12 last year, she saw the Cathedral collapse, along with her home, and she now lives in a makeshift shelter, one of more than 800,000 homeless quake survivors who are still camped out in tents and tarpaulins 12 months after the disaster.

Reconstruction work has barely begun, profiteering by Haiti's tiny and notoriously corrupt elite has reached epic proportions, and a national cholera epidemic has added to the misery of the quake-crippled country.

"God made the earthquake, but it's our leaders who are selling our misery," said Sephonese Louis, 58, one of the protesters in the Champs de Mars, Port-au-Prince's central plaza where thousands of families made homeless by the quake live in a sweltering tent city.

A political impasse since a disputed presidential election on Nov. 28 has fuelled further instability.

Fast action to spruce up supplies in the cholera-torn region of Haiti is need of the hour, as the number of cases of cholera may soon touch 200,000, an expert has warned.
<< Global Plan Launched by WHO to Halt Malaria Drug Resistance
Britain Pledges 750 Million Pounds to Boost Cancer Strategy >>

When the screams of women giving birth die down, you can hear the subdued cries of those babies who made it alive into the chaotic post-quake suffering of Port-au-Prince's general hospital.
News A-Z
A B C D E F G H I J K L M N O P Q R S T U V W X Y Z
What's New on Medindia