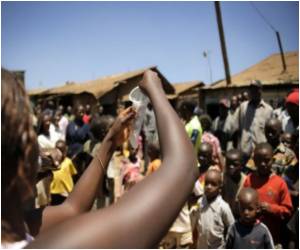 AIDS experts have come together in Vienna on Sunday for a six-day rally to discuss newer strategies in a battle which after nearly thirty tumultous years is showing great promise.

Expected to draw more than 20,000 researchers, policymakers and grassroots workers, the International AIDS Conference is the 18th since acquired immune deficiency syndrome came to light in 1981.

For almost all this time, the conferences have been the theatre for frustration and sometimes anger. Doctors would reel off the latest setbacks in the quest to treat and prevent the AIDS virus, while activists pounded the drum for money and action by Big Pharma.


Today, though, the mood is brighter than ever. Indeed, many AIDS warriors are talking cautiously of a foe that is on the way to being contained and one day will be rolled back.

Encyclopedia section of medindia gives general info about AIDS information and health education.
Advertisement
"One day, we will have to turn our minds on how to wipe out the virus," Jean-Francois Delfraissy, director of France's National Agency for AIDS Research (ANRS), said in an interview.

The optimism comes from the success of antiretroviral drugs, the "cocktail" of drugs that, like a boot pressed firmly on the throat of a killer, keeps HIV suppressed.

For millions, this medication has transformed the human immunodeficiency virus (HIV) from a death sentence to a chronic but manageable disease.

Even better, antiretrovirals are also emerging as a policy tool for prevention. Lowering viral levels to below perceptible levels massively reduces the risk of handing on the pathogen between sex partners or from a pregnant mother to her child.

There is also hugely encouraging news about male circumcision for preventing the spread of HIV to men, and even a few glimmers of hope from the lab, where scientists are toiling for a vaccine and virus-thwarting microbicide gel.

"We really are at an important crossroads," Gottfried Hirnschall, new director of HIV/AIDS at the UN's World Health Organisation (WHO), said in an interview.

"It's all coming together. We no longer have this treatment-versus-prevention conversation. The question now is about making the best of the resources we have, and in the most intelligent way."

More than 33 million people live with the virus and each year 2.7 million more cases of HIV occur. Stigma, ignorance and discrimination, in many places, are entrenched. Millions of poor, needy people have yet to clutch the drug lifeline.

To help them, a key question in Vienna is how to finetune the use of antiretrovirals and mesh them with low-cost medical support, using nurses or medical orderlies as substitutes for doctors.

Doctors may be advised to start prescribing anti-HIV drugs at an earlier stage of infection, a tactic that would save more lives and, say some, be a cost-saver too, as healthy people are more productive for longer.

Yet does the world have the will, at a time of belt-tightening, to foot the bill for treating people sooner?

This year, 25 billion dollars has to be mustered for fighting AIDS in poorer countries, according to a UNAIDS estimate. So far, there is a funding shortfall of 11.3 billion, according to an analysis published last week in the US journal Science.

That means a 2006 vow by UN members to provide "universal access" to HIV drugs, prevention, treatment and care by the end of 2010 is set to become one more headline-making political promise that fell flat.

"The success of ARVs (antiretrovirals) made it so people think HIV is no longer there," said Julio Montaner, director of the BC Centre for Excellence in HIV/AIDS in Vancouver, Canada, and president of the International AIDS Society, which is organising the conference.

"Politicians basically react on a short-term agenda. Since HIV treatment became effective, people are not under the same pressure that they used to be."

The Vienna conference will also turn the spotlight on Eastern Europe, where the epidemic is being driven especially by intravenous drug users.

Russia and Ukraine, the two hotspots of infection, are under pressure to scrap policies that criminalise drug users and to encourage needle-exchange programmes and help to wean addicts off heroin by using methadone, a safer substitute for opiates.