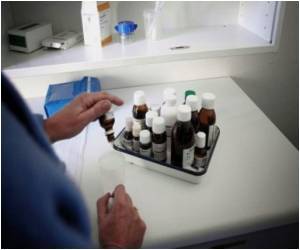 The discovery led by biochemist Scott Garman at the University of Massachusetts Amherst has discovered a key interaction at the heart which not only will help to find new cure for Fabry disease but also help to understand of other protein-folding disorders such as Alzheimer's, Parkinson's and Huntington's diseases, as well.

Metabolism is the sum total of all chemical and physical changes that take place in any organism that enables it to function and grow.
Advertisement

People born with Fabry disease have a faulty copy of a single gene that codes for the alpha-galactosidase (α-GAL) enzyme, one of the cell's "recycling" machines. When it performs normally, α-GAL breaks down an oily lipid known as GB3 in the cell's recycling center, or lysosome. But when it underperforms or fails, Fabry symptoms result. Patients may survive to adulthood, but the disorder leads to toxic lipid build-up in blood vessels and organs that compromise kidney function or lead to heart disease, for example.


The faulty gene causes its damage by producing a misfolded protein, yielding an unstable, poorly functioning α-GAL enzyme. Like origami papers, these proteins are unfolded to start and only become active when folded into precise shapes. At present, enzyme replacement therapy (ERT) is the only FDA-approved treatment for such lysosomal storage disorders as Fabry, Pompe and Gaucher diseases, but ERT requires a complicated and expensive process to purify and replace the damaged α-GAL enzyme, and it must be administered by a physician.

Alzheimer''s disease is a progressive neurodegenerative disease affecting memory and thinking and making the person increasingly dependent on others.
Advertisement
Instead of replacing the damaged enzyme, an alternative route called pharmacological chaperone (PC) therapy is currently in Phase III clinical trials for Fabry disease. It relies on using smaller, "chaperone" molecules to keep proteins on the right track toward proper folding, but their biochemical mechanism is not well understood, says Garman.

Now, he and colleagues report results of a thorough exploration at the atomic level of the biochemical and biophysical basis of two small molecules for potentially stabilizing the α-GAL enzyme. He says their use in PC therapy could one day be far less expensive than the current standard, ERT, and can be taken orally.

This work, which improves knowledge of a whole class of molecular chaperones, represents the centerpiece of UMass Amherst student Abigail Guce's doctoral thesis and was supported by the National Institutes of Health. Other members of the team are graduate students Nat Clark and Jerome Rogich.

"The interactions we looked at are exactly the things occurring in the clinical trial right now," Garman says. Further, "the same concept is now being applied to other protein-folding diseases such as Parkinson's and Alzheimer's disease. Many medical researchers are trying to keep proteins from misfolding by using small chaperone molecules. Our studies have definitely advanced the understanding of how to do that."

In their current paper, Garman and colleagues compare the ability of two small chaperone molecules, galactose and 1-deoxygalactononjirimycin (DGJ) to stabilize the α-GAL protein, to help it resist unfolding in different conditions such as high temperature and different pH levels.

They found that each chaperone has very different affinities: DGJ binds tightly and galactose binds loosely to the α-GAL, yet they differ in only two atomic positions. "Tight is better, because you can use less drug for treatment," Garman says. "We now can explain DGJ's high potency, its tight binding, down to individual atoms."

In earlier studies as in the current work, the UMass Amherst team used their special expertise in X-ray crystallography to create three-dimensional images of all atoms in the protein to understand how it carries out its metabolic mission. They also found a new binding site for small molecules on human α-GAL that had never been observed before.

Crystallography on the two chaperones bound to the α-GAL enzyme showed that a single interaction between the enzyme and DGJ was responsible for DGJ's high affinity for the enzyme. Other experiments also showed the ability of the 11- and 12-atom chaperones to protect the large, 6,600-atom α-GAL from unfolding and degradation.

For the first time, by making a single change in one amino acid in protein, they forced the DGJ to bind weakly, indicating that one atomic interaction is responsible for DGJ's high affinity.

"It was surprising to find these two small molecules that look very much the same have very different affinities for this enzyme," says Garman, "and we now understand why. The iminosugar DGJ has high potency due to a single ionic interaction with α-GAL. Overall, our studies show that this small molecule keeps the enzyme from unfolding, or when it unfolds, the process happens more slowly, all of which you need in treating disease."

Parkinson's disease is a neurodegenerative disease caused by progressive dopamine brain cells loss. Symptoms of Parkinson's disease are correctable to an extent.
Advertisement
<< HIV Risk In Tattooing At Bali
Compound Found In Virgin Olive Oil And Fish May Prevent Acu... >>