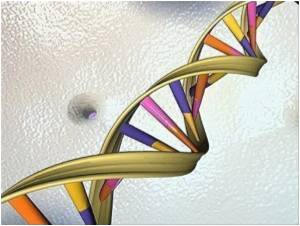 A new method of examining cancerous tumors suggests that tumors may not evolve gradually, but rather in a punctuated or staccato-like bursts.

The finding has shed new light on the process of tumor growth and metastasis, and may help in the development of new methods to clinically evaluate tumors.


Genomic copy number refers to the amount of DNA in the nucleus. In cancer, portions of the genome are amplified or deleted, giving rise to extra or missing copies of key genes and interfering with mechanisms that normally control cell growth.

An ideal tumor marker for a cancer should be specific to that cancer and not generate false positive results.
Advertisement
"We demonstrated that we can obtain accurate and high-resolution copy number profiles by sequencing a single cell from a cancerous tumor and that by examining multiple cells from the same cancer, we can make inferences about how the cancer evolved and spread," said Wigler.

The CSHL team used two sampled tumors. Both were primary invasive breast cancer tumors of the so-called "triple-negative" type, generally regarded as the most aggressive form of breast cancer.

One tumor sample was known from prior testing to be polygenomic: composed of distinct populations of tumor cells, whose number, genomic type and evolutionary history were not readily measurable using conventional techniques.

The other sampled tumor was monogenomic: composed of cells of a single genetic type. Unlike the first sample, this one had metastasized, to the liver, and samples of that tumor were also subjected to analysis.

Using SNS, in concert with whole-genome amplification and next-generation sequencing, the CHSL team was able to show that in fact three distinct subpopulations of tumor cells were present.

It has been theorized that genetically heterogeneous tumor cell populations become mixed via gradual evolution. The CSHL team, in contrast, suggests the evolution is likely punctuated.

The second breast cancer sample analyzed by the team was of a single genomic type, but the team was able to determine that the liver metastasis to which it had given rise was very closely related, in genomic terms.

The study has been published in the journal Nature.

Breast cancer is one of the leading causes of cancer deaths among women. It is often said that a woman who breast-feeds is at a lower risk of developing cancer compared to another who does not .Are these mere old wives tales or is there some truth in it? This quiz on breast cancer has all the details.
Advertisement
<< New Methods to Reduce Healthcare Associated Infections
Causes of Chronic Liver Cirrhosis >>