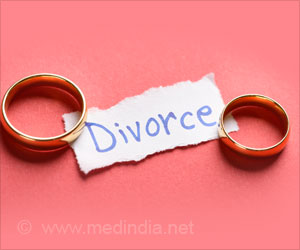 Cooperative co-parenting after divorce is often best for children's well-being, shows prior research.

To promote this, more than half of America's courts require some type of education for divorcing parents to help them establish workable co-parenting plans. Now, a new study from the University of Missouri shows that concerns about co-parenting differ by gender, impacting the ability of divorced parents to work together in supporting their children's development. By understanding the implications of these concerns, better programs for divorcing parents can be developed that can have a positive impact on the overall health of the children involved.

Divorce Or Marital Break-Up may Lead to Eczema, Muscle Pain

Psychological stress increases the damage caused by free radicals - unstable molecules which attack healthy cells and are believed to play a part in heart disease.
Advertisement
‘Cooperative co-parenting is the best bet for children of divorce, however, co-parenting plans often can be derailed by parental conflict and concerns.’

For the study Lawrence Ganong, co-chair of the Human Development and Family Science Department at the University of Missouri, and Marilyn Coleman, Curators' Distinguished Professor Emerita of Human Development and Family Science partnered with Luke Russell, a doctoral candidate in the College of Human Environmental Sciences, to analyze data collected from "Focus on Kids" - a program developed by MU faculty.


"We know that cooperative co-parenting is the best bet for children of divorce," Russell said. "However, co-parenting plans often can be derailed by parental conflict and concerns. Our question as researchers was how concerns differed between mothers and fathers, so we could use that information to improve co-parental education programs."

Parents of a child with a developmental disability tend to experience greater marital stress compared to peers raising typically developing children.
Advertisement
Russell and his colleagues found that fathers' parenting behaviors were most affected by financial and legal concerns, especially regarding child support payments perceived as unjust or excessive. They found that mothers' co-parenting, on the other hand, were more influenced by concerns about the mental instability and parental fitness of their ex-spouses. Although both parents also reported logistical concerns--for example, the fear that distance and demanding work schedules would prohibit them from visiting their child--these concerns had no impact on the reported behaviors of either parent.

"Divorce education programs devote significant energy to addressing logistical barriers, such as distance and schedules; yet, we found these concerns had no impact on behavior or parenting styles," Russell said. "However, other perceived barriers, financial for fathers and parental fitness for mothers, did have the potential to impact behaviors, which can make it more difficult to implement workable co-parenting plans."

Russell suggests that family professionals could help couples overcome economic and legal concerns through increased career-training or teaching mothers to better communicate financial needs. Fathers may be more willing to accept paying child support when they understand how payments benefit their children, and when they themselves are more financially secure.

To counteract mothers' concerns about parental fitness, Russell suggests that family professionals focus on helping fathers develop the skills they need to be effective parents when they are alone with their children, and to take steps to actively demonstrate this capability to their ex-spouse. To reduce children's exposure to conflict, however, in some situations it may be necessary to suggest reducing contact between ex-spouses.

"Perceived barriers to post-divorce co-parenting: differences between men and women and associations with co-parenting behaviors," recently was published in Family Relations. It was coauthored by Jonathon J. Beckmeyer an MU alumnus and current assistant professor of Applied Health Science at Indiana University. Together, Ganong and Coleman have studied, taught, counseled and mediated with divorced parents, stepfamilies and stepfamily members for more than 30 years. Ganong has a joint appointment in the MU Sinclair School of Nursing.

Going into surgery, the married participants already tended to be healthier than their counterparts in the study.
Advertisement
<< Benefit Unclear in Newborn Screening for Tyrosinaemia Type ...
Cells During Embryonic Development also Rust >>

Never married, divorced and widowed women 18 years of age and older are typically more liberal and democratic compared to other married women.

Parental Tips to Raise Your Child Right
News Archive
News Resource
Advertisement
News Category
Milestone In Voluntary Blood Donation Achieved Samsung Reinvents Toilet for the Poor Which is a Better Form of Exercise: Daily or Weekly? First Phase of Foot-and-Mouth Disease Vaccination Shocking News: Polio Cases Return After a Decade in the US
More News
Sign up for Wellness Consult a Doctor Sign up for Selfcare

More News on:
Parental Tips to Raise Your Child Right