Prince Harry Named 'Man of the Year' by Brit Mag 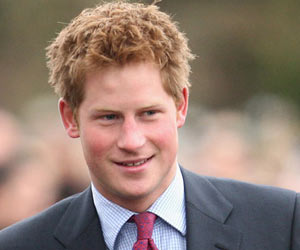 Prince Harry has been touted as the 'Man of the Year' by Tatler magazine.

The brooding prince graces the cover of the British magazine decked out in his finest military gear, News.com.au reported.

What happens in Vegas famously should stay in Vegas -- and Sin City displays oon Friday at those who it says betrayed Prince Harry by leaking pictures of him partying naked.
Advertisement

The piercing blue eyes of the third in line to the throne appear to have been doctored to make them as turquoise as his Army Air Corps beret.


This is the first time in two decades a man has fronted the famous magazine. The last being his father, Prince Charles, back in 1992.

Kate Middleton also featured on the cover earlier this year and also back in 2011, while sister Pippa Middleton also got her very own cover after the royal wedding, though neither posed for the mag.

It's not first time 'Dirty Harry', as Tatler refers to him, has posed for a magazine - he featured on the cover of British GQ last year along with wounded military servicemen.

Who is Set to Become An Olympic Patron? Prince Harry Of Course

Diaphragmatic Hernia Sinopril (2mg) (Lacidipine) Drug Side Effects Calculator Drug - Food Interactions Loram (2 mg) (Lorazepam) Accident and Trauma Care A-Z Drug Brands in India Calculate Ideal Weight for Infants How to Reduce School Bag Weight - Simple Tips Find a Doctor
This site uses cookies to deliver our services. By using our site, you acknowledge that you have read and understand our Cookie Policy, Privacy Policy, and our Terms of Use