Preterm Delivery Not a Risk of Air Pollution 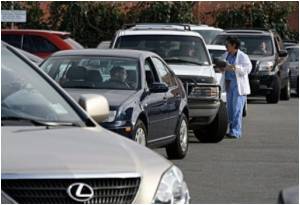 Exposure to carbon monoxide and fine particles in the air during pregnancy does not increase the risk of preterm delivery or preeclampsia, according to a new study.

The research was conducted in the region around Seattle, Wash., using data from 3,675 women who were enrolled in the Omega Study, an investigation of the effects of diet and environment on women's health and nutrition before and during pregnancy.

"There is strong evidence that air pollutants may increase risk of cardiovascular disease. This led me to examine air pollutants in relation to preeclampsia, which is similar to cardiovascular disease and a risk factor for the condition," said Carole Rudra, assistant professor of social and preventive medicine at the University at Buffalo, and first author on the study.


"Pollutants may interfere with delivery of oxygen to the placenta and increase maternal oxidative stress and inflammation. These pathways could lead to both preeclampsia and preterm delivery," Rudra added.

Traffic-related air pollution may increase the risk of developing type 2 diabetes in women, says a new study.
Advertisement
Rudra noted that carbon monoxide levels were fairly high in the Seattle area in comparison with other U.S. cities when she began this research, but have declined significantly in recent years.

The researchers collected data from regional air-pollutant-monitoring reports on concentrations of carbon monoxide (CO) and minute airborne particles (such as dust, fumes, mist, smog and smoke) during specific exposure windows at residences of study participants.

The exposure windows were the three months before pregnancy, the total of the first four months of pregnancy, during each trimester and the last month of pregnancy.

Analysis of the data showed that the amount of air pollutant exposure at any of the collection times had no effect on either of the pregnancy problems.

"In this geographic setting and population, these two air pollutant exposures do not appear to increase risks of preeclampsia and preterm delivery," said Rudra.

The results were presented June 23 at the Society for Pediatric and Perinatal Epidemiology annual meeting held in Seattle.

Heart Health In Jeopardy Due to Particulate Air Pollution