Pretenders to Crown of Hot-Dog Chomper Weigh in 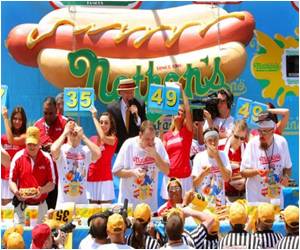 Pretenders and world-record holders in America weigh in to the crown of hot-dog chomper of the year, the hugely popular annual July 4 Coney Island competition set to draw thousands.

Seventeen men and 13 women are competing to see how many beef franks they can down in 10 minutes at Nathan's Hot Dog Eating Contest at the cheesy Brooklyn seaside resort on Friday.

Come rain or shine -- and thunderstorms are predicted overnight -- organizers insist the contest will be held outdoors and watched by millions more when it broadcasts live on ESPN2.

Top Tips for a Healthy Thanksgiving

Here are some suggestions that could ensure that you remain healthy through Thanksgiving and the season ahead.
Advertisement
"I faced Sonya 10 times over the last year and a half, and beat her every single time," Las Vegas's Sudo told a New York press conference on Thursday.

Thomas, a skinny Korean-American who weighs 100 pounds (45 kilos), doesn't just have one world record, she has 23.

She is the champion of baked beans (8.42 pounds in two minutes 47 seconds); cheesecake (11 pounds in nine minutes); lobster (44 in 12 minutes) and oysters (564 in eight minutes), according to Major League Eating

But her favorite food? Hard-boiled eggs. She can eat 92 in eight minutes.

On the men's side, California's Joey "Jaws" Chestnut, 30, has been reigning champion for seven consecutive years.

Last year he beat his own record by eating 69 dogs, but he faces stiff competition from the much smaller Matt Stonie.

"I know I can beat him," said Stonie.

If that's the case, Chestnut can console himself with his other 31 world records, including in ice cream (15 pints of vanilla in six minutes); bratwurst sausages (70 in 10 minutes); and hard-boiled eggs (141 in eight minutes).

To get the dogs down, each contestant has certain tricks, but most soak the bread in water and eat the meat separately.

Anyone who vomits is disqualified.

Nathan's Famous Hot Dogs says the Independence Day contest has been running since 1916 -- when the winner consumed 13 hot dogs.