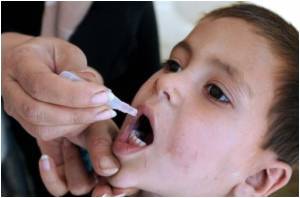 The President had introduced the bivalent oral polio vaccine in the National Immunization Programme for the first time in January 2010.


The last six months have seen the lowest number of polio cases during the high transmission season of any year since polio eradication efforts were started in India.

This medication is an active immunization against poliomyelitis.
Advertisement
Only 42 polio cases have been detected in 2010 (as on January 3, 2011) compared to 741 cases of polio in 2009.

Uttar Pradesh has reported 10 polio cases in 2010 as compared to 602 cases last year.

Uttar Pradesh has not reported any polio case since April 2010.

The Minister informed that during this countrywide polio campaign starting tomorrow, around 174 million children of less than five years of age will be given polio drops as a part of the Union Government's drive to eradicate polio.

Azad elaborated that six polio campaigns will be conducted in the high-risk states/areas between March and November 2011.

The high-risk areas that will be covered include parts of Uttar Pradesh, Bihar, Delhi, Maharashtra, West Bengal, Haryana, Punjab, Uttarakhand, Rajasthan and Gujarat.

"A rapid response task force is being constituted to plan and conduct aggressive mopping up vaccination in response to any poliovirus that is detected anywhere in the country henceforth so that all chains of polio transmission are finally broken," Azad said.

P-1 Type Polio Virus on Its Way Out in Bihar

Bihar is close to winning its unrelenting battle against the P-1 type polio virus with just 3 P-1 type cases as per recent statistics.
Advertisement
Advertisement