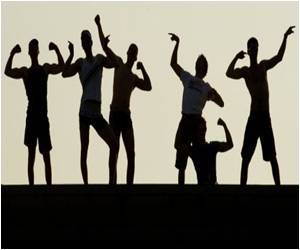 Although present at low levels in females, testosterone is one of the primary sex hormones that exerts substantial influence over the emergence of differences between males and females.

Testosterone levels early in fetal development influence later sensitivity of brain regions related to reward processing and affect an individual's susceptibility to engage in behaviour, that in extremes, are related to several neuropsychiatric conditions that asymmetrically affect one sex more than the other, a new study has found.

Testosterone Levels Drop in Fathers Who Sleep Closer to Children

Fathers who co-sleep with children have lower testosterone levels, finds study published in PLOS ONE.
Advertisement

Dr. Michael Lombardo, Prof. Simon Baron-Cohen and colleagues at the University of Cambridge led the study.


In adults and adolescents, heightened testosterone has been shown to reduce fear, lower sensitivity to punishment, increase risk-tasking, and enhance attention to threat. These effects interact substantially with context to affect social behaviour.

A new study has found a connection between weight loss and improved testosterone levels.
Advertisement
This knowledge about the effects of testosterone in adolescence and adulthood suggests that it is related to influencing the balance between approach and avoidance behaviour. These same behaviours are heightened in the teenage years and also emerge in extremes in many neuropsychiatric conditions, including conduct disorder, depression, substance abuse, autism, and psychopathy.

Scientists have long known that sex differences influence many aspects of psychiatric disorders, including age of disease onset, prevalence, and susceptibility. For example, according to the World Health Organization, depression is twice as common in women than men, whereas alcohol dependence shows the reverse pattern.

In addition to many other factors, sex hormone levels are likely to be important factors contributing to sex differences in psychopathology.

"This study is the first to directly examine whether testosterone in fetal development predicts tendencies later in life to engage in approach-related behaviour (e.g., fun-seeking, impulsivity, reward responsivity) and also how it may influence later brain development that is relevant to such behaviours," said first author Lombardo.

In this study, they tested a unique cohort of boys, 8 years of age, whose fetal testosterone had been previously measured from amniotic fluid at 13 weeks gestation. The boys were scanned with functional magnetic resonance imaging technology to assess changes in brain activity while viewing pictures of negative (fear), positive (happy), neutral, or scrambled faces.

Lombardo explained, "This work highlights how testosterone in fetal development acts as a programming mechanism for shaping sensitivity of the brain's reward system later in life and for predicting later tendency to engage in approach-related behaviours. These insights may be especially relevant to a number of neuropsychiatric conditions with skewed sex ratios and which affect approach-related behaviour and the brain's reward system."

The finding was reported in Biological Psychiatry.

Use Of Testosterone Levels to Test If Athletes can Compete as Women: International Olympic Committee

New regulations adopted by the International Olympic Committee to determine whether an athlete should or should not be allowed to compete as a woman.
Advertisement
<< Low Vitamin D Connected to Improved Longevity
The Young Employees Bogged Down by Stress >>

Drop In Testosterone Levels in Men Not Linked To Aging