Prenatal Forest Fire Exposure Can Cause Stunting in Children 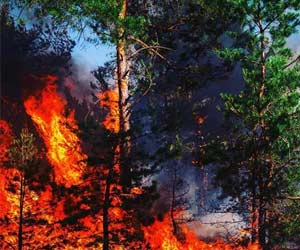 Mom's exposed to forest fire smoke during pregnancy are more likely to have stunted children, reports a new study.

Forest fires are more harmful than previously imagined, causing stunted growth in children who were exposed to smoke while in the womb, according to new research from Duke University and the National University of Singapore.

Advertisement
‘Forest fires can cause stunted growth in children who were exposed to smoke while in the womb.’

The authors found prenatal exposure to haze from forest fires led to a statistically significant 1.3-inch decrease in expected height at age 17.


"Because adult height is associated with income, this implies a loss of about 3 percent of average monthly wages for approximately one million Indonesian workers born during this period," the authors write.
Advertisement
"While previous research has drawn attention to the deaths caused by the forest fires, we show that survivors also suffer large and irreversible losses," they wrote. "Human capital is lost along with natural capital because of haze exposure."

"This disadvantage is impossible to reverse," said co-author Subhrendu Pattanayak of the Duke Sanford School of Public Policy.

"There are ways to eliminate these fires that are not that expensive, so this seems a very shortsighted way to develop and grow an economy," Pattanayak said.

The study, "Seeking natural capital projects: Forest fires, haze, and early-life exposure in Indonesia," by Pattanayak and Jie-Sheng Tan-Soo of the Lee Kuan Yew School of Public Policy appears in the Proceedings of the National Academy of Sciences.

In 1997, which was an abnormally dry year, fires set to clear land primarily for oil palm plantations spread and burned out of control. Between August and October, when the fires were most intense, they engulfed 11 million hectares (27.2 million acres), causing massive exposure to unhealthy levels of air pollution. That year, about 25 percent of global carbon emissions were generated by this single event.

The study examined data for 560 affected children who were in utero or in the first six months of life at the time of the fires. Their health outcomes and household characteristics were drawn from 1997, 2000, 2007, and 2014 rounds of the Indonesian Family Life Survey.

The authors conducted a series of robustness checks and confirmed their findings were not driven by high levels of pollution in later years, geographic factors, an indirect effect of severe air pollution on a family's ability to work and to earn income, or overall reductions in food consumption during the months of the forest fires.

After documenting the negative effects of the fires on health and well-being, the authors went on to conduct a series of cost-benefit analyses to determine whether spending to avoid such outcomes would be fiscally justifiable.

Poor Growth Before Birth Stands Out as the Top Reason for Child Stunting
Reducing the burden of stunting requires continuing efforts to diagnose and treat maternal and ......

Consequence of Forest Fires on Public Health Being Measured By Study
A study finds that pollution from forest fires is impacting the health of people with asthma and ......