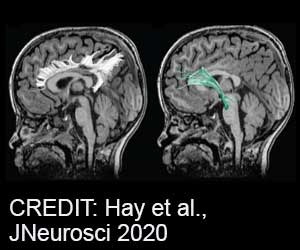 Up to one fifth of women experience depression symptoms during pregnancy, with unknown effects on the fetus. Prenatal depression is correlated with behavioral and developmental issues in the child, as well as an increased risk of developing depression at age 18. But how prenatal depression leads to these changes remains unclear.

Hay et al. studied 54 mother/child pairs. Mothers answered a survey about their depression symptoms at several points during their pregnancy. The research team employed diffusion MRI, an imaging technique that reveals the strength of structural connections between brain regions, to examine the children's white matter.


‘New study highlights the need for better prenatal care to recognize and treat prenatal depression in order to support the mother and the child's development.’


Greater prenatal depression symptoms were associated with weaker white matter connections between brain regions involved in emotional processing. This change could lead to dysregulated emotional states in the children and may explain why the children of depressed mothers have a higher risk of developing depression themselves. The weakened white matter was associated with increased aggression and hyperactivity in the male children.

Severity Of Mothers Depression During Pregnancy Causes Autism And ADHD
Exposure to antidepressant drugs during pregnancy does not increase the risk for autism and ADHD. It's the severity of mother's depression that increases the risk.
READ MORE