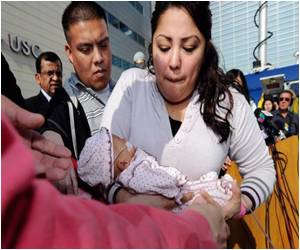 A small imaging study of 40 kids has revealed that exposure to air pollution in the womb may be bad for children's brains and may contribute to slower processing speeds and behavioural problems, including attention deficit hyperactivity disorder (ADHD) symptoms.

Did You Know Air Pollution Poses a Significant Stroke Risk?

Air pollution has been linked to narrowing of carotid arteries that occurs prior to strokes, revealed researchers at NYU Langone Medical Center.
Advertisement


To examine the effects of PAH exposure on brain structure, they conducted an imaging study that included 40 minority urban school-aged children born to Latin or African American women in New York City.

A pair of air pollutants linked to climate change could also be a major contributor to the rise in the number of people sneezing, sniffling and wheezing.
Advertisement
The children were followed from before birth until seven to nine years of age and their mothers completed prenatal PAH monitoring and prenatal questionnaires.

"Our findings suggest that PAH are contributors to ADHD and other behavioural problems due to the pollutants' disruptive effects on early brain development," Dr. Bradley Peterson, director of the Institute for the Developing Mind at the CHLA, said in a statement.

The study found a powerful relationship between increased prenatal PAH exposure and reductions in nearly the entire white matter surface of the brain's left hemisphere.

Reduced white matter surface on the left side of the brain was associated with slower processing of information during intelligence testing and more severe behavioural problems, including ADHD and aggression, they said.

Peterson noted that the study's findings were limited to a minority population with a high level of poverty and low educational attainment, and may therefore not generalise to other populations, although impoverished urban minority populations are disproportionately exposed to air pollutants.

While this initial study size was also limited, the researchers are currently undertaking a much larger study in order to confirm and extend their findings. "Our findings raise important concerns about the effects of air pollutants on brain development in children, and the consequences of those brain effects on cognition and behaviour," said Peterson. "If confirmed, our findings have important public health implications, given the ubiquity of PAH in air pollutants in the general population."

Previously, the Columbia researchers had reported that exposure to airborne PAH during gestation in this cohort was associated with multiple neuro-developmental disturbances, including development delay by age three, reduced verbal IQ at age five and symptoms of anxiety and depression at age seven.

A new study has found that cognitive development in children between the age of 7-10 slows down,due to higher levels of traffic related air pollution around schools.
Advertisement
Advertisement