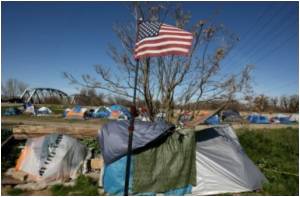 The worth of Canadian households is so much more in comparison to their American counterparts by a strong margin for the first time, states report.


The average Canadian also has a house 'worth over $140,000 more' than their neighbours to the south, the newspaper reported, giving them "almost four times as much remaining equity in their real estate."

Official statistics have revealed that one out of every three people in Britain claiming unemployment benefits have a criminal record
Advertisement
Their unemployment rate dropped to 7.2 percent last month, while the American unemployment rate has held steady at 8.2 percent for the past few months.

Canadian consumer confidence is also higher than in the United States, the report said.

The average American has more liquid assets, cash in hand, than the average Canadian.

COVID Toes
View all
News Archive
News Resource
Advertisement
News Category
JUUL E-Cigarettes Banned from US Market Busy Americans Get The Least Sleep At 40 Years Deepika Padukone Rushed To Hospital After Sudden Chest Pain Vegans, Vegetarians and Fish Eaters Have Better Memory Than Meat Eaters How to Reduce the Risk of Acute Kidney Injury By Drinking Coffee?
More News
Sign up for Wellness Consult a Doctor Sign up for Selfcare