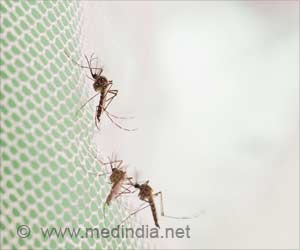 Malaria threatens millions of pregnant women and young children. Mosquito nets are the most prominent malaria preventive measure and help control the spread of diseases caused by mosquito bites.

When households in sub-Saharan Africa don't have an adequate number of insecticide-treated bed nets, pregnant women and children under five are the most likely family members to sleep under the ones they have, leaving men and school-aged children more exposed to malaria, new Johns Hopkins Center for Communication Programs (CCP) research suggests. CCP is based at the Johns Hopkins Bloomberg School of Public Health.

Advertisement
‘Mosquito nets are draped over the bed as a barrier against mosquito bites. A new study highlights that pregnant women and young children are more likely to use mosquito nets to protect themselves from deadly malaria.’
Read More..

The findings, published in Malaria Journal, also show that when households have an adequate supply of treated bed nets - one for every two members living under the same roof - these gender and age disparities shrink.


The World Health Organization credits the widespread use of insecticide-treated bed nets with playing a huge role in the reduction of the number of malaria cases in sub-Saharan Africa since 2001.
Advertisement
The new research finds, however, that across 29 countries in sub-Saharan Africa, on average, only 30 percent of households have enough bed nets, ranging from 8.5 percent in Cameroon to 62 percent in Uganda.

"The good news is that we have succeeded in protecting some of the most vulnerable people - pregnant women and young children - from malaria," says Bolanle Olapeju, MBBS, Ph.D., a senior research data analyst with CCP who led the research as part of CCP's VectorWorks team. "Now, we need to go even further to provide enough nets for everyone else."

Mosquito nets are draped over a bed as a barrier against bites from mosquitos - and the diseases they carry. The nets do double duty in that they are treated with an insecticide that kills many of those mosquitos that land on them.

Under the global effort to prevent malaria in sub-Saharan Africa, nearly two billion have nets have been distributed for free since 2004. Nets don't last forever and must be replaced roughly every three years. The most common way that nets are distributed is through what are known as mass campaigns. Nets are also provided through health clinics to pregnant women, during vaccination of small children and through school-based campaigns in some countries.

For the research, Olapeju and her team analyzed data from Malaria Indicator Surveys and Demographic and Health Surveys conducted in sub-Saharan Africa between 2011 and 2016. This analysis allowed them to determine patterns of net use both when there were an adequate number of bed nets in a household and when there were not.

They found that, for the most part, people use the nets they have. One concern going into the research was that heads of households could be hoarding nets and not allowing others in the home to use them, but the researchers found this was not the case.

"Once you get more nets into households, age and gender disparities shrink, so we need to keep reminding policymakers of the importance of getting nets to as many people as possible," Olapeju says. "It's one of the best ways we have to prevent malaria."

Whether there were an adequate number of nets in the home or not, however, the researchers found that those who were least likely to sleep under nets were school-aged children, those from ages five to 14. The researchers say this is concerning because even though this group is less likely to suffer from the symptoms of malaria, these children are more likely to have asymptomatic malaria which can still be spread to others by mosquito bites.

"The global stakeholders have done a lot to provide nets and prevent malaria," Olapeju says. "But this is the time to push harder toward eliminating malaria and one way to do that, it appears, is with more nets."

Malaria - Protection Strategies
Malaria is a dangerous disease with lethal consequences that requires protective measures for ......