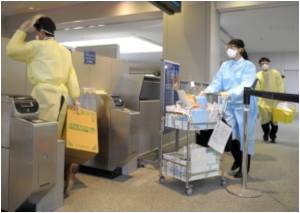 The first swine flu victim in Mumbai this year is twenty-seven-year-old Naziya Admane, from Alibaug. She died from complications arising from swine flu at the Sion Hospital last Friday.

"She was eight months pregnant so she was more vulnerable. She was brought to Mumbai in a critical condition," said Dr G.T. Ambe, BMC's executive health officer. Maharashtra continues to battle swine flue even as 20 deaths were reported in May, down from the 30 reported in April.

Maharashtra's H1N1 death toll now stands at 465 after the deadly H1N1 virus hit India in May last year. "H1N1 is behaving like a typical respiratory virus. The activity of viruses increases during the post- monsoon and winter period but they stay in circulation through the year," said Dr Abhay Choudhary, director of Haffkine Institute in Parel.


Experts say there may be a resurgence of the virus in India following the monsoon season.

The World Health Organization said Tuesday it was worried that up to a quarter of the fatal swine flu cases in the Western Pacific were patients with no underlying medical condition.
Advertisement

A row in Germany over a two-tier swine flu vaccination programme has prompted Chancellor Angela Merkel to say she'll get the jab meant for the public rather than...