President Pranab Mukherjee said that time has come for the Indian healthcare system to revolutionize itself and make India self-reliant in its healthcare requirements.

Inaugurating the 10th Knowledge Millennium Summit on 'Curing the Incurables - Sharing of Innovations' organized by ASSOCHAM here, Mukherjee said: "The challenges that the Indian healthcare sector faces are substantial, but the opportunities equally compelling."

"For companies that view the Indian healthcare sector as a glass half full, the potential is enormous as India is one of the few locations in the world with the latest in healthcare technologies including automation, surgical robotics, modular operating theatres, minimal access surgery systems, telemedicine, radiology, etc," he added.

"We need to take health services closer to the homes of the families. We need out of the box managerial and administrative reforms in the health departments at the state and central level. We need to develop effective models of healthcare for the ever-increasing urban population and at the same time not ignore rural healthcare needs. The foundation of India's national health system must be strong, sensitive and efficient, he added.

Stating that the Government is keen to continue to encourage private investment in the healthcare sector and is now developing Public Private Partnerships models to improve availability of healthcare services and provide healthcare financing, Mukherjee said: " There is also growing interest among foreign players to enter India's healthcare sector through capital investments, technology tie-ups, and collaborative ventures across various segments, including diagnostics, medical equipment, big hospital chains, education and training."

"Advances are underway on several fronts, from expanding health insurance coverage for the poor and building hospitals in smaller towns, to using technology for safer drinking water and improving treatment outcomes. We should take pride in the fact that heart surgeries in India cost less than a tenth of what they would in the United States," he said.

"But there is still no denying that the Healthcare delivery gap is huge in India. It is estimated that 64 percent of the poorest population in India become indebted every year to pay for the medical care they need. 85 percent of the Indian workforce working in the informal sector do not have any kind of insurance and lack access to effective social protection schemes," he added.

"One solution is telemedicine - the remote diagnosis, monitoring and treatment of patients via videoconferencing or the Internet," he added.

Bottom Line of Hospitals may be Helped by Physical Therapy in the Intensive Care Unit
The up-front costs are outweighed by the financial savings generated by earlier discharges from the intensive care unit.
READ MORE 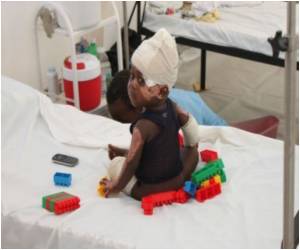 Fire Breaks Out in Bikaner Hospital, Four Infants Injured
A fire at the Prince Bijoy Memorial Hospital in Bikaner in Rajasthan on Sunday morning has injured four babies.
READ MORE

British Hospitals May Face Closure If They Cover Up Blunders
After some terrible health scandals, British government hospitals are now likely to be threatened with closure if they covered up doctors' mistakes and poor treatment of patients.
READ MORE