A huge 7.6 magnitude earthquake struck off India's remote Andaman Islands on Tuesday, triggering panic as people fled their homes amid initial warnings of a possible tsunami.

An Indian Ocean tsunami alert issued for India, Myanmar, Indonesia, Thailand and Bangladesh was later cancelled by the Pacific Tsunami Warning Center of the US National Weather Service.

"Sea level readings indicate that a significant tsunami was not generated," the centre said.


The emergency services control centre in Port Blair, the main town of the Andaman Islands, said there were no reports of any casualties and that property damage had been limited to cracks in some buildings on Diglipur island in the northern Andamans.

The Andamans were badly hit by the 2004 Asian tsunami which was triggered by an earthquake off the Indonesian island of Sumatra and sent giant waves crashing into countries around the Indian Ocean.

"It was very frightening. Everything started shaking and people were running out of their homes," said Mrinal Sarkar, a villager in Diglipur.

"People are afraid to go back inside," Sarkar told AFP.

S.N. Jha, who heads the islands' Disaster Management Committee, said emergency services had been put on alert across the territory within minutes of the earthquake being felt.

"In the end there was some panic in Northern Andaman, but there have been no reports of any serious damage to property or loss of life," Jha said.

Mild tremors from the quake were felt 1,190 kilometres away in the eastern Indian port city of Chennai.

India's national tsunami warning centre said it had detected no sign of any abnormal surge in sea levels.

"We haven't issued any tsunami warning so far," said Ravichandra Vedula, an official with the Indian National Centre for Ocean Information Services in the southern city of Hyderabad.

"We are monitoring all data on water levels and no anomaly has been observed. Everything is normal," Vedula told AFP.

The epicentre was also around 360 kilometres southwest of the Irriwaddy Delta region of Myanmar, which was devastated by a huge cyclone in May last year that left more than 138,000 people dead.

Thailand's National Disaster Warning Centre, which was set up after the 2004 tsunami, said it was monitoring events.

"We have been warned about the quake and are watching the situation. We have not yet issued an alert, we are still watching developments," an official at the centre said.

The 2004 tsunami killed more than 220,000 people, most of them in the northern Indonesian province of Aceh. Thousands of people were also killed in Sri Lanka, Myanmar, Thailand and India.

The Andaman and Nicobar Islands are some of India's most eastern pieces of territory. More than 350,000 people live in the territory flanked by the Andaman Sea and the Bay of Bengal, and it comprises some 572 islands.

The Andaman Sea area witnesses frequent earthquakes caused by the meeting of the Indian plate with the Burmese microplate along an area known as the Andaman trench.

WHO Urges Building of Disaster-proof Hospitals
The World Health Organisation has urged governments across the globe to build hospitals to withstand earthquakes and other disasters.
READ MORE 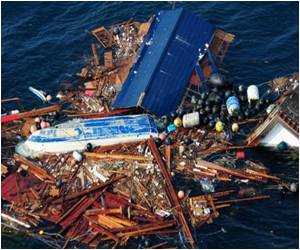 The Lurking Tsunami: Are We Ready?
The Tsunami is a series of large ocean waves, caused by an underwater activity, like an earthquake, volcanic eruption or a landslide, which displaces a large body of water
READ MORE

COVID-19 in Combination With Stroke Doubles Death Risk
View all