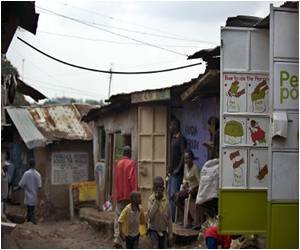 By age 4, children in families living with incomes under 200 percent of the federal poverty line have less gray matter, brain tissue critical for processing of information and execution of actions, than kids growing up in families with higher incomes.

The differences among children of the poor became apparent through analysis of hundreds of brain scans from children beginning soon after birth and repeated every few months until 4 years of age.


Children in poor families lagged behind in the development of the parietal and frontal regions of the brain - deficits that help explain behavioral, learning and attention problems more common among disadvantaged children.
Advertisement
The parietal lobe works as the network hub of the brain, connecting disparate parts to make use of stored or incoming information.

The frontal lobe, according to UW-Madison psychology professor Seth Pollak, is one of the last parts of the brain to develop and is used to control our attention and regulate our behavior.

The maturation gap of children in poor families is more startling for the lack of difference at birth among the children studied.

Pollak said that infants' brains look very similar at birth, but you start seeing the separation in brain growth between the children living in poverty and the more affluent children increase over time, which really implicates the postnatal environment.

Pollak said that the absence of enriching activities and interactions can cause a decrease in the generation of neurons and synapses in the brain.

Health of Children Threatened by Poverty
Experts from the fields of politics, social sciences, economists and pediatricians come together to ...

Redefine Poverty Indicator to Begin at the Time of Conception
The World Bank must define life expectancy, its key poverty indicator, as starting at the time of .....

The Adverse Effects of Poverty
Nearly 20 years ago, groundbreaking research linking a mother's educational background to her ......

Nurturing is a Good Way to Insulate Kids From Brain Changes Connected to Poverty
Growing up in poverty can have long-lasting, negative consequences for a child. But for poor ......

Marasmus / Protein-Energy Malnutrition
Marasmus is a severe potentially life-threatening form of malnutrition caused by a diet deficient in...