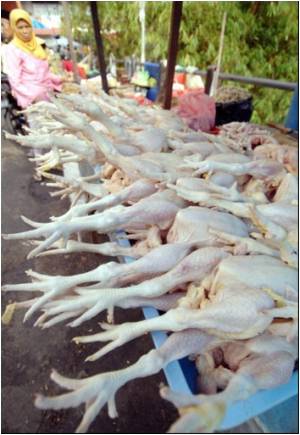 Eight genes that could recreate a pathogene similar to that which caused the 1918 deadly Spanish flu pandemic, was found in bird flu viruses circulating in nature, revealed a study Wednesday.

An international team of virologists identified the key genetic components -- similar to those in the virus behind the 1918 pandemic -- in influenza viruses in wild ducks.

"There are gene pools in nature that have the potential to cause a severe pandemic in the future," said the report's senior author and lead researcher Yoshihiro Kawaoka of the University of Wisconsin-Madison, whose work was published in the journal Cell Host and Microbe.


The Spanish flu was responsible for 40 million deaths worldwide.

The scientists used reverse genetic methods to recreate a virus that differed from that of the Spanish flu by only 3 percent of the amino acids that make the virus proteins.

A newly detected variant of bird flu virus has been associated with serious lung infection, ultimately resulting in death.
Advertisement
In the animals it was tested on, the new virus was less pathogenic than the Spanish flu -- but more so than avian flu -- and, at least in ferrets, didn't transfer via respiratory droplets, the main way the flu virus spreads.

However, the scientists then discovered seven mutations in three virus genes that allowed it to spread as easily as the Spanish flu in ferrets, an animal commonly used in influenza transmission studies.

Consisting of genetic factors already present in wild bird populations, the virus showed that genetic ingredients capable of combining to create a dangerous pathogen that could produce a human pandemic exist in nature.

According to Kawaoka, the discovery could help scientists develop more effective strategies to combat the emergence of such a disease.

The research also shines light on the bird flu virus's adaptive mechanisms for spreading to mammals.

A mutation of a protein on the surface of the virus, for example, allows it to cling to an organism's cells and could increase the virus's ability to infect human respiratory tracts.

The scientists also noted that the virus was sensitive to oseltamivir, an antiviral medication to prevent and slow the flu.

Blood Donation - Recipients Find a Hospital Daily Calorie Requirements Pregnancy Confirmation Calculator Selfie Addiction Calculator Drug Interaction Checker Sinopril (2mg) (Lacidipine) Find a Doctor How to Reduce School Bag Weight - Simple Tips Drug Side Effects Calculator
This site uses cookies to deliver our services. By using our site, you acknowledge that you have read and understand our Cookie Policy, Privacy Policy, and our Terms of Use