Postpartum Transfusions on the Rise 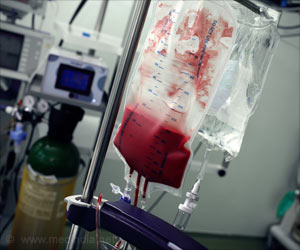 Women who receive a blood transfusion after giving birth were found to be twice as likely to have an adverse reaction related to the procedure, such as fever, respiratory distress, or hemolysis (destruction of red blood cells), compared with non-pregnant women receiving the same care, stated new study published today in Blood Advances.

A blood transfusion is a medical procedure in which compatible, cross-matched blood (red blood cells) is transfused into a person through an intravenous line (IV).
Advertisement
‘Women with preeclampsia, a condition marked by high blood pressure during pregnancy, were found to be at the greatest risk for problems.’
Tweet it Now

Although the exact reason for the increase in postpartum transfusions is not fully known, pregnant women today tend to be older, have higher body fat, more often conceive by in vitro fertilization, and are more likely to undergo cesarean delivery, have placental complications or multiple pregnancies, which are thought to be contributing factors, according to the researchers.


"Blood transfusions are on the rise among postpartum women. There seems to be something about pregnancy that makes transfusion-related adverse events and complications more likely," said Lars Thurn, PhD, of Karolinska Institutet in Stockholm, Sweden, and the study's senior author. "Based on our findings, obstetricians and clinicians need to be more aware of these potentially harmful reactions when evaluating pregnant women for blood transfusion, especially if they have preeclampsia, induced labor, or preterm delivery (before 34 weeks)."

In pre eclampsia a pregnant woman develops high blood pressure and proteinuria during pregnancy.
Advertisement
This retrospective, population-based study included all women who gave birth in Stockholm County, Sweden, between 1990 and 2011. Researchers linked data from the Swedish National Birth Registry to the Stockholm Transfusion Database, which included information on blood components administered and whether a transfusion reaction occurred in women who received blood transfusions postpartum. These data were compared with the outcomes of non-pregnant women who received blood transfusions during the same study period.

Of the 517,854 women included, 12,183 (2.4 percent) received a blood transfusion. A total of 96 postpartum transfusion-related reactions were recorded, with a prevalence of 79 versus 40 occurring for every 10,000 pregnant and non-pregnant women, respectively. The risk of a transfusion-related reaction was also doubled among women diagnosed with preeclampsia compared with pregnant women who didn't have the condition. v Previous cesarean delivery also heightened the risk of placental complications and bleeding in subsequent pregnancies. In this study, 26 percent of all women who received more than 10 units of blood postpartum had a previous cesarean delivery compared with 8 percent of women who had no blood transfusion postpartum. The likelihood of problems was also significantly increased when a combination of all three types of blood component (red blood cells, plasma and platelets) was administered.

"Most blood transfusions are safe and many are life-saving, but adverse transfusion reactions and transfusion transmitted infections are a concern," said Dr. Thurn. "In this population blood products should only be administered when necessary and when alternative options have been considered."

During pregnancy, a woman's immune system changes to accept and protect the growing fetus. In addition, red cell, leukocyte, and platelet antibodies are often elevated in women who have had previous pregnancies, which have been found to be associated with a higher risk of transfusion reactions. These and other changes, including the rise in blood flow and workload on the heart, may play a role in transfusion-related complications, added Dr. Thurn.

He and his team are hopeful that this study will prompt research to understand the causes and/or risk factors associated with different types of transfusion reactions in pregnancy to help make transfusions safer.

Typhoid is an infectious disease that follows intake of food or water contaminated with the bacterium Salmonella typhi. Test your knowledge on this disease by taking this quiz.
Advertisement