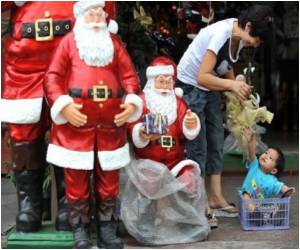 US shoppers will use their gift cards, for post-holiday bargains and to exchange some unwanted presents, say industry trackers.

Fifty-seven percent of Americans planned to shop on Monday, the day after Christmas, as compared with 43 percent who did so in 2010, according to a study carried out earlier this month by credit card giant American Express.

This Christmas season be an organ donor and donate the gift of life..!
Advertisement

"Don't expect the holiday shopping marathon to end on Christmas Day," said Pam Codispoti, one of the executives in charge of consumer card services at American Express.


According to a new Consumer Reports poll published Monday, four in 10 Americans will shop over the next few days.

Of those who said they wanted to keep on shopping, 82 percent said their main reason to hit the stores was the "lure of post-holiday sales," 47 percent wanted to use gift cards, and 31 percent expected to return something.

A lovely thing about Christmas is that it's compulsory, like a thunderstorm, and we all go through it together. - (Garrison Keillor) - a Christmas special report from Medindia.
Advertisement
Retail tracker ShopperTrak noted that there was an additional Saturday this year between Thanksgiving and Christmas, perhaps boosting last-minute sales.

Their last survey, published on December 21, showed that month-to-date figures were up 0.5 percent from last year. New data was due on Wednesday.

"December's retail gains will likely continue all the way through Christmas and the end of Hanukkah," said ShopperTrak founder Bill Martin.

"As the weather gets colder and these important days get closer, retailers should be ready to service customers looking to buy."

A new study has said that women have nearly 50 per cent more money spent on them for Christmas gifts than men do.
Advertisement
Advertisement
This site uses cookies to deliver our services.By using our site, you acknowledge that you have read and understand our Cookie Policy, Privacy Policy, and our Terms of Use  Ok, Got it. Close
×