Possibility of 75 US Scientists Being Exposed to Anthrax: CDC 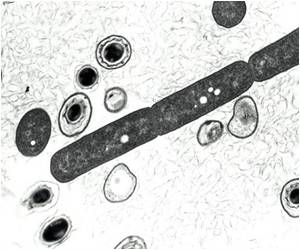 Around 75 scientists are suspected to be accidentally exposed to anthrax at a US government health facility in Atlanta, Georgia, authorities said Thursday.

The scientists have been given antibiotics and are being monitored for signs of illness, the Centers for Disease Control and Prevention said in a statement.

The potential exposure occurred at a high-security lab "after established safety practices were not followed," said the CDC.


Samples of Bacillus anthracis (anthrax) were being prepared for research at lower-security labs "to yield new means of detecting dangerous pathogens in environmental samples," it said.

The bacterium which is responsible for causing anthrax develops a strategy reminiscent of the Trojan horse tale.
Advertisement
"However, the lab used a procedure that did not adequately inactivate the samples."

The CDC said the staff members at risk were being monitored out of an abundance of caution, though the risk of infection was "very low."

"Based on the investigation to date, CDC believes that other CDC staff, family members, and the general public are not at risk of exposure and do not need to take any protective action," it said.

Anthrax is a disease caused by a germ that lives in soil, and gained notoriety after a spate of US mail attacks in 2001 killed five people.

'Lethal Factor' may be X-factor for Anthrax Vaccine

A section of the anthrax toxic Lethal Factor could help produce a more effective vaccine, a team of researchers have identified.
Advertisement
<< Internet Use Linked to Decline in Academic Performance
Thrombolysis Reduces Mortality Rates, but is Linked With In... >>

Accident and Trauma Care Blood - Sugar Chart The Essence of Yoga A-Z Drug Brands in India Pregnancy Confirmation Calculator Turmeric Powder - Health Benefits, Uses & Side Effects Blood Pressure Calculator Sinopril (2mg) (Lacidipine) How to Reduce School Bag Weight - Simple Tips Diaphragmatic Hernia
This site uses cookies to deliver our services. By using our site, you acknowledge that you have read and understand our Cookie Policy, Privacy Policy, and our Terms of Use