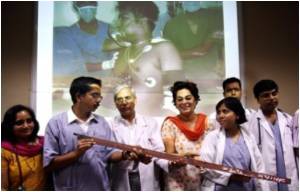 Doesn't positive thinking come naturally to Asians, one might be tempted to ask in the wake of a US study.

The University of Washington psychologists have found that pursuing happiness may not be beneficial across all cultures.

The study indicates that psychotherapies emphasizing positive emotions, which can relieve stress and depression in white populations, may not work for Asians, who make up 60 percent of the world population.


Thinking happy thoughts, focusing on the good and downplaying the bad is believed to accelerate recovery from depression, bolster resilience during a crisis and improve overall mental health.

Have you ever tested your happiness level? Test your happiness and find out how happy you are with your life.
Advertisement
But in a survey of college students, the Asian respondents showed no relationship between positive emotions and levels of stress and depression.

The researchers asked 633 college students  a mix of Asian immigrants, Asian Americans and European Americans  to rate how much stress and depression they felt and how often they've been in a sad mood, felt worthless or had sleep or appetite changes.

The participants also rated the intensity of the positive emotions that they felt, including feelings of serenity, joy, confidence and attentiveness.

The findings show that the Asians interpret and react to positive emotions differently in regards to their mental health.

Upon winning an award, for instance, the researchers said that a typical response would be "I'm so happy that I'm afraid." The award would trigger feelings of happiness for the achievement combined with concern that others would be jealous.

This blend of emotions is common among Asians, Leu said, and it may be shaped by Buddhist beliefs that happiness either leads to suffering or is impossible to obtain.

"Happiness signals that something bad will happen next; happiness is fleeting," she said. Similarly, yin-and-yang attitudes may instill views that life is a natural balance of good and bad.

For the Asians with depression, therapies likely to work the best are those that encourage patients to "observe when they feel good and bad and notice that both will disappear. Everything passes," Leu said.

The findings have implications for helping the Japanese recover from natural disasters and subsequent nuclear crisis in March, and for Chinese coping with post-traumatic stress following the 2008 Sichuan province earthquake.

"If we are to relieve some of the trauma from the tsunami and earthquakes, we have to be careful of imparting Western therapies," said Janxin Leu, UW assistant professor of psychology. "I worry that if a therapy which relies on positive emotions and thinking is used with Asian patients, it will not be effective and may even make patients feel worse."

Mindfulness therapies that encourage patients to pay attention to the good and the bad will likely work better, she said.

Co-authors of the paper are Jennifer Wang and Kelly Koo, both UW psychology graduate students. The journal Emotion published the study online March 28.

Source: Medindia
Advertisement
<< Lower Vitamin D Levels Behind Hypertension Problems Among B...
Traumas Could Cause Greater Damage In Women >>

Drug Side Effects Calculator Diaphragmatic Hernia Drug - Food Interactions Calculate Ideal Weight for Infants The Essence of Yoga A-Z Drug Brands in India How to Reduce School Bag Weight - Simple Tips Blood Donation - Recipients Noscaphene (Noscapine) Find a Hospital
This site uses cookies to deliver our services. By using our site, you acknowledge that you have read and understand our Cookie Policy, Privacy Policy, and our Terms of Use