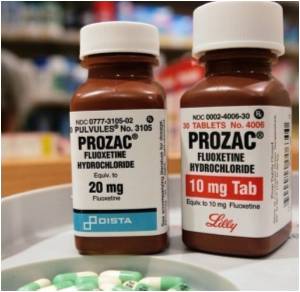 The popular anti-depressant Prozac can inhibit sexual activity in fish if it seeps into waterways, according to a Canadian study published Tuesday.

Led by Vance Trudeau and Tom Moon of Ottawa University's biology department, researchers found that male goldfish exposed to Prozac did not respond to sexual advances.

It has emerged that those five days of the month when women suffer pain and emotional stress of PMS may soon become a thing of the past, as Prozac can be a remedy to relieve them.

In nature, female goldfish release chemicals called pheromones to indicate to males that they are ready to mate.


Male fish would normally detect the chemicals just as humans smell odors, and then stimulated to breed with the females would release their sperm to fertilize the eggs.

But the male goldfish exposed to Prozac did not respond to the pheromone and so did not release their sperm.

"Even when the potent female sex pheromone was in the water, male goldfish exposed to Prozac did not release sperm and therefore could not breed," Trudeau said in a statement.

The study was published in the journal Aquatic Toxicology.

In an earlier study, the same researchers found that high doses of fluoxetine, the active chemical in Prozac, not only destabilized sex hormone levels in female goldfish, but also slashed estrogen levels in the blood.

"As these effects of Prozac are found in both male and female fish, we must now consider Prozac-like pharmaceutical products as environmental pollutants that cause sexual dysfunction in fish," Trudeau concluded, noting the drug has been detected in sewage effluents around the world where it is sold.

Prozac is taken by more than 54 million people worldwide.

Britney Was On Prozac For Depression, Panic Attacks At 18

Britney Spears was prescribed Prozac-used for depression and panic attacks-at the age of 18.

Female sexual dysfunction is defined as persistent and recurrent problems with sexual response or desire. It ...