Pope to Wash Feet of Prisoners and Women to Mark Easter 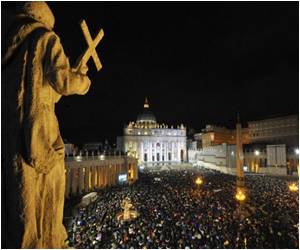 Underlining the changing scenario at the Vatican with a focus on reaching out to those who are in need, Pope Francis revealed that he will mark the Easter celebrations by washing the feet of young prisoners and women on Thursday.

The Holy Thursday mass will kick off an intense four days of symbolic ceremonies which commemorate Jesus Christ's crucifixion and resurrection.

Francis' decision to celebrate Christ's Last Supper in the Casal del Marmo prison in northwest Rome, rather than in St. John Lateran's Basilica as per tradition, may be a hint of a shake-up in keenly observed Easter rituals.


He called for changes in everyday faith in a message posted on Twitter on Wednesday, which read: "Being with Jesus demands that we go out from ourselves, and from living a tired and habitual faith."
Advertisement
When the former Jorge Bergoglio was archbishop of Buenos Aires, he held masses in prisons, hospitals, slums or old people's homes, and has called repeatedly for the Roman Catholic Church to be closer to ordinary people.

The washing of feet is a tradition based on the belief that Christ washed the feet of his apostles before the final meal together before his crucifixion -- and the choice of prisoners corresponds with the pope's Holy Week message.

In the first general audience of his papacy on Wednesday, the pontiff called on the world's 1.2 billion Catholics to reach out to "lost sheep" during the coming days -- the highlight of the Christian calendar for many pilgrims.

"Holy Week challenges us to step outside ourselves so as to attend to the needs of others: those who long for a sympathetic ear, those in need of comfort or help," Francis told thousands of faithful gathered on St. Peter's Square.

"We should not simply remain in our own secure world -- that of the 99 sheep who never strayed from the fold -- but we should go out, with Christ, in search of the one lost sheep, however far it may have wandered," he added.

Francis will begin the day with a solemn chrism mass in St. Peter's Basilica at 0830 GMT, before travelling to the prison where he will hold the afternoon Lord's Supper mass with 35 male and 11 female offenders, aged from 14 to 21.

Most of the inmates at the institute are foreign-born and Muslim or atheist.

The 12 prisoners who will have their feet washed will be chosen from different nationalities and religious confessions. It is not clear whether any of the inmates chosen to take part in the washing ceremony are female.

While Bergoglio has washed women's feet in past ceremonies, traditionalists would be riled by such a gesture as they hold that the disciples were all male.

The pope will also meet with other inmates in the institute's gymnasium.

On Friday, Francis will recite the Passion of Christ -- the story of the last hours of Jesus' life -- in St. Peter's Basilica, before presiding over the Via Crucis ceremony by the Colosseum, where thousands of Christians were martyred in Roman times.

This year's Stations of the Cross reflections have been written by two young Lebanese people under the guidance of the Maronite Patriarch Beshara Rai, who was given the task by Francis' predecessor Benedict XVI before he retired.

While a frail Benedict presided over last year's celebrations from under a canopy next to the Colosseum, 76-year-old Francis is expected to take part in the procession and even carry the wooden cross on his shoulder for part of the way.

On Saturday, the pontiff will take part in an evening Easter vigil in St. Peter's Basilica. The Vatican has not yet said whether Francis will follow the tradition of baptising eight adult converts to the Church during the service.

On Sunday he will celebrate Easter mass in front of tens of thousands of pilgrims in St. Peter's Square, before the Vatican's first non-European pope in nearly 1,300 years pronounces the "urbi e orbi" blessing to Rome and the world.

Pope Decides to Stay in the Vatican Guesthouse
Rather than moving into the vast palace used as the official papal residence, Pope Francis ......