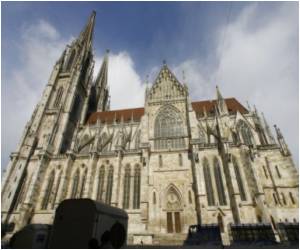 The double canonization of popes John Paul II and John XXIII on Sunday is expected to be a historic event and Rome is getting ready for hundreds of thousands of pilgrims and dozens of foreign delegations visiting the Vatican.

Italy's interior ministry said it is expecting 19 heads of state, 24 heads of government and 800,000 pilgrims.

Even as it celebrates its 30th birthday since being set up by the late John Paul II, the Vatican television service is busy changing its style in order to adapt to Pope Francis.
Advertisement

"It will be an event of global significance," Rome mayor Ignazio Marino said in the run-up to the ceremony that will confer sainthood on the two late pontiffs.


Monsignor Liberio Andreatta, head of the Vatican agency for pilgrims, on Wednesday said: "This is an event that Rome has never seen in its history -- the canonisation of two popes in the presence of two living popes".

A revamped version of its Latin-language journal Latinitas was presented by the Vatican.
Advertisement
Pope emeritus Benedict XVI, who last year became the first pontiff since the Middles Ages to step down, is expected although the Vatican said the elderly ex-pope has not yet made up his mind whether he will attend.

Rome city hall said local authorities have put in place a 7.8 million euro ($10.8 million) plan for increased visitors that began before Easter on Good Friday on April 18 and will run until labour day on May 1.

For the period of the canonisation, the city's plan is to boost public transport with extra buses on Saturday and Sunday and run the metro system around the clock.

Nineteen giant screens are being set up around the city to follow the ceremonies in different languages including Arabic, French, Italian, Polish and Spanish.

The mayor's office is awaiting 4,300 coaches and there were will be special trains and flights to the city.

Some pilgrims will even arrive by boat to the port of Civitavecchia near the Italian capital.

"From Poland alone, we are expecting 1,700 coaches, 58 charter flights and five special trains," said Maurizio Pucci, an official from Rome city hall, saying the canonisation will put the city under "stress".

The interior ministry will deploy 2,400 security officers and there will be around 2,000 extra local police officers in the streets.

Law enforcement are also expecting an influx in pickpockets from across Italy to take advantage of the concentration of foreign tourists.

A "security corridor" will be set up along the main avenue leading up to the Vatican to allow through police, official delegations and ambulances.

St Peter's Square will be closed to pedestrians on Saturday and access for pilgrims to the ceremony will only begin on Sunday at 530 AM (0330 GMT).

More than 2,600 volunteers from the civil protection agency will take turns helping visitors, giving out four million water bottles to tourists and pilgrims.

They will be helped by 600 volunteers from Catholic organisations, hundreds of doctors and nurses and around 1,000 cleaning personnel to keep streets tidy.

Vatican radio has said that alongside its spiritual programming, it will be transmitting public information announcements in different languages for pilgrims.

The result of the arrivals is already visible in rental prices, with the web portal Casa reporting the average for a furnished flat being rented out for the canonisation weekend up between 137 and 173 percent from previous weekends.

Antonio Paolucci, the Vatican museum director, criticised contemporary-style churches for lacking form and harked back to the Baroque era when he said that shrines embodied religious faith.
Advertisement
<< WHO Takes Strong Stand Against Vaccine Deniers
Belgium: Soviet Space Capsule Up for Sale >>

Dental Braces
News Archive
News Resource
Advertisement
News Category
How to Reduce Needle Anxiety in Children? Tobacco Addiction: Here's How to Break the Habit Parents are 'Winging It' on Their Kids' Mobile Use Ankle and Ankle Movements While Riding an Hoverboard Is It Healthy to Let Your Mind Wander?
More News
Sign up for Wellness Consult a Doctor Sign up for Selfcare