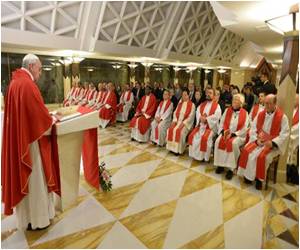 Pope Francis participated in Orthodox Patriarch Bartholomew I in an historic joint prayer for the Christian unity at Christianity's holiest site in Jerusalem on Sunday.

They met at the Church of the Holy Sepulchre inside the walled Old City after signing a landmark pledge to work together to further unity between the eastern and western branches of Christianity, estranged for a millennium.

The meeting has been billed as the main reason for the pope's three-day trip to the Middle East, which ends on Monday.


It commemorates the historic rapprochement between both branches of the Christian church 50 years ago, when Pope Paul VI met and embraced Patriarch Athenagoras -- the first easing of tensions between the Churches since the Great Schism in the 11th century.
Advertisement
Both leaders knelt side by side in prayer on the rough Stone of the Anointing, where the body of Jesus was laid before burial, removing their headgear as they did so.

Both had to be helped to their feet by aides at the end of the prayer. The pope is 77, Bartholomew, one of the Orthodox Chuch's most revered figures, 74.

A choir sang a Greek chant as they slowly walked into a joint service in the dimly-lit church, packed with religious figures and dignitaries, and later burst into a joyous rendition of Hallelujah.

Earlier, the two men signed a joint pledge to pursue common dialogue, which reaffirmed values common to the Catholic and Orthodox churches.

"Our fraternal encounter today is a new and necessary step on the journey towards the unity of communion in legitimate diversity," says the declaration which was signed in the presence of representatives of 13 Catholic and Orthodox churches in Jerusalem.

The logo for the pope's journey is a picture of St Peter and St Andrew -- symbolising the churches of the east and west -- embracing in a boat with a mast in the shape of a cross.

The Great Schism in 1054 split Rome and Constantinople, seat of Orthodoxy.

According to Christian tradition, the Church of the Holy Sepulchre where the joint service was held, was built on the site of the crucifixion, burial and resurrection of Jesus.

Argentine Shanty Builders Inspired by Pope Francis
A new shantytown is rising up in Buenos Aires with the 3,000 hopeful residents-to-be taking ......

Pope Francis Hopes His Unifying Gesture Will Win Over Orthodox Christians
The head of the Catholic Church faces an uphill battle if he is to unite the Catholic and Orthodox ....