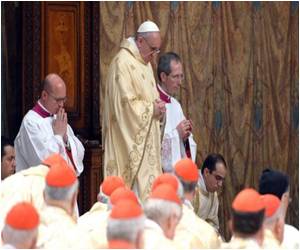 In his first remarks since being elected as the leader of more than 1.2 billion Catholics, Pope Francis revealed that he wants a 'poor church for the poor'. .

The new Pope revealed how he chose the name Francis as his official title, saying his choice was inspired by St Francis of Assisi and reflected his desire for the Catholic Church to be an institution "of the poor, for the poor."

According to the Telegraph, Jorge Mario Bergoglio, the former archbishop of Buenos Aires, whose surprise election as Pope stunned the world, said the name came to him as he realized that voting was going his way during the conclave.


The Pope, speaking to an audience in the Vatican that consisted of thousands of journalists from around the world who covered his election, described how it dawned on him that support for his candidacy was reaching 'dangerous' levels.
Advertisement
The Pope's address was a fresh indication of his determination to make the Church more austere and relevant to real-life problems such as poverty and suffering.

According to the report, he has stunned Vatican officials in his first few days as Pope, declining the papal limousine in favour of minibuses, addressing cardinals as his 'brothers' rather than 'my lord cardinals' and paying his own bill at the clerical residence he stayed in before the conclave.

His remarks were greeted with laughter, applause and a standing ovation and murmurs of "bellissimo" from Italian journalists, the report added.