Pope Focuses on 'Service' for Women 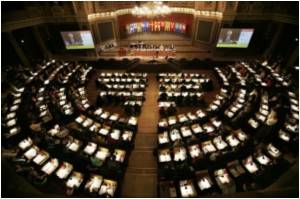 Women should be given the role of being one of the 'service' and not 'servitude,' the Pope explained at a Vatican conference.

Pope Francis said he "suffered" when he saw "in the Church, or in certain Church organisations... that the woman's service role slips into one of servitude," the agency I-Media quoted him as saying.

Just seven months after its initial attempt was blocked by traditionalists, the Church of England has voted to restart the process to ordain women bishops in the country.
Advertisement

He also singled out two dangers facing Catholic women, beginning with "motherhood being reduced to a social role".


On the other hand, he said that the "sort of emancipation" that allows women to enter traditionally male domains may rob them of "the very femininity that characterises them".

Gay Ministers Voted In By Church of Scotland

Following years of debate between the liberal and traditionalist sides of the church, the Church of Scotland voted to allow gay ministers.
Advertisement
The 76-year-old Argentine pontiff, elected in March, also said he likes to think of the Church as feminine.

"The Church is a woman, a mother, that is what is beautiful," he told some 150 people attending the conference marking the 25th anniversary of the publication of papal text on the woman's vocation.

Francis said the text, an encyclical by pope John Paul II titled "Mulieris dignitatem", was a "historic document, the first from the papacy that was entirely devoted to the subject of the woman."

Whatever cultural and social changes have occurred or may occur, "the fact remains that it is the woman who conceives, carries and brings into the world the children of men," the pontiff said.

Antonio Paolucci, the Vatican museum director, criticised contemporary-style churches for lacking form and harked back to the Baroque era when he said that shrines embodied religious faith.
Advertisement
<< Serbia Residents Buy Meals for Poor
Must Have Vegetables Listed in Weight Control Plans to Boost... >>

How to Choose the Best Eczema-Friendly Moisturizer for Children?
View all
News Archive
News Resource
News Category
Harm Reduction in Current Tobacco Control Treaty  WHO's Critique Tobacco Epidemic Continues and is Far From Endgame Summer Camps: Safety Not Always a Priority for Most Parents International Tea Day: 5 Destinations to Celebrate This Day Internet Addiction: Root Causes and Prevention
More News
Sign up for Wellness Consult a Doctor Sign up for Selfcare