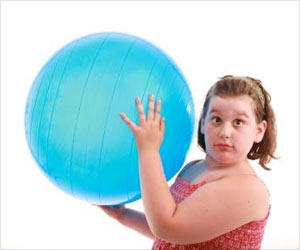 Fundamental Movement Skills (FMS) are a set of skills that include running, catching and balancing. Children who were poor at FMS were at the risk of developing obesity. It was found that young girls with low FMS were at greater risk than the boys.

In previous studies, primary school children have shown a higher body mass index and were likely to have poorer fundamental movement skills.

Childhood obesity is one of the most serious health challenges in the developing countries and needs to be understood and tackled effectively.
Advertisement
‘Body fat increases in children who are poor at fundamental movement skills (FMS) causing obesity.’
Tweet it Now

For the new study, the team assessed running, catching and balance skills of 250 girls and boys between 6-11 years, categorizing their FMS as either low, medium or high.


The researchers then cross-referenced the kids' motor skills with their body fatness to investigate the relationship between the two. The children's habitual physical activity was also taken into account.

Obesity is the root cause of problems like diabetes, heart disease, stroke, arthritis and gall bladder disease. A serious look at our strategies is needed to tackle this fast growing epidemic.
Advertisement
The results showed that body fatness was significantly higher among girls in the low FMS category compared with boys as well as girls with high FMS.

"What we've found is significant because it signals a need to review the strategies we have to enhance motor proficiency in girls," said lead researcher Mike Duncan, professor at Coventry University in Britain.

"The next big question is whether developmental delays in acquiring these motor skills, whether in girls or boys, may actually be the cause of children gaining unhealthy weight status," Duncan said.

The study was presented recently at the British Association of Sport and Exercise Sciences Conference 2016 in Nottingham, Britain.

Hemiplegia is a condition that is characterized by paralysis of one half of the body, usually due to a brain ...
This site uses cookies to deliver our services.By using our site, you acknowledge that you have read and understand our Cookie Policy, Privacy Policy, and our Terms of Use  Ok, Got it. Close
×