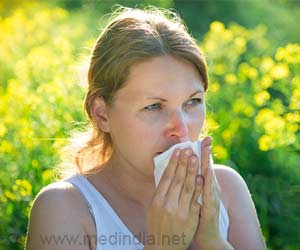 We know that children with pollen food allergy syndrome (PFAS) also suffer from seasonal allergies. A new study being presented at the American College of Allergy,

Pollen food allergy syndrome (also known as oral allergy syndrome) is caused by cross-reacting allergens found in both pollen and raw fruits, vegetables, or some tree nuts. Symptoms usually include itchy mouth, scratchy throat, or swelling of the lips, mouth, tongue, and throat.


‘All 20 patients reported PFAS symptoms. Of the 20 surveyed, 11 (55 percent) described improvement or resolution of their symptoms.’
Read More..


"We surveyed 20 pediatric patients between the ages of 9 and 18 receiving allergy shots as a treatment for mugwort, timothy and orchard grass allergies," says allergist Alana Jones, DO, ACAAI member and co-author of the study.

PFAS typically does not appear in young children. It is more common in older children, teens, and young adults who have been eating the fruits or vegetables in question for years without any problems. In addition, young children under the age of 3 do not usually develop hay fever until after they are toddlers. Hay fever is associated with reactions to the pollens that cross-react with the foods. Those with PFAS typically have an allergy to either tree, weed, and/or grass pollens.

"Research has shown that adults who receive allergy shots see improvement in PFAS symptoms, but the effect hasn't been widely shown in pediatric patients," says Dr. Jones. "We think it's an important finding, especially for kids who are receiving allergy shots and also suffering from PFAS."