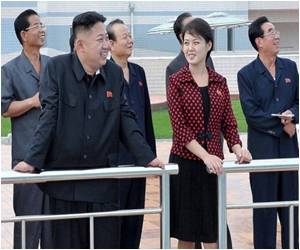 According to an annual list compiled by a research analyst in South Korea, polka-dot dresses and manual threshing machines were among the hottest consumer products in North Korea last year.

The arrival of the boldly patterned dresses in the top 10 list was down to North Korean leader Kim Jong-Un's wife, Ri Sol-Ju, who was seen wearing them to public functions on state television.


Dong has been compiling a top 10 chart of consumer items in North Korea since 2010, basing her findings on interviews with North Korean defectors and Chinese traders on the Sino-North Korean border.

The fact that manual threshing machines made the list spoke of the prevalence of electricity cuts in the countryside, Dong said.

Survey of Cancer Patients and Others in Korea Highlights Attitudes Toward End-of-Life Care
A Korean study in CMAJ ( Canadian Medical Association Journal ) has found that attitudes...

N Korea to Receive One Million Dollars to Fight Malaria from South Korea
South Korea will this year provide North Korea with supplies worth 1.18 million dollars to help ......