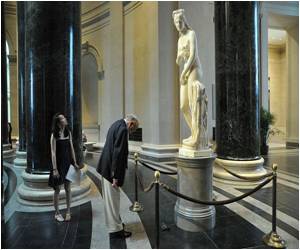 The monumental hero of Soviet days, a lenin statue that has returned to a one time model communist city in Poland is now a small, green man urinating from atop a black plinth.

The ironic take on the Russian revolutionary stands in Nowa Huta, a working class suburb of Krakow, to offer a bit of comic closure with its often difficult communist past.

"Are we capable of ascribing a funnier, surrealist meaning to this past, of bursting the bubble, of showing that we're able to let go of the trauma through laughter and distance?" asks artist Bartosz Szydlowski who created the piece with his wife Malgorzata.


It was put up as part of an arts festival that displayed works around this city of more than 200,000 residents.

Called the "Fountain of the Future", the statue aims to subvert the ideological symbolism of the larger-than-life original, which was erected after World War II when Poland was a Soviet satellite then taken down when the regime fell in 1989.
Advertisement
The fluorescent Lenin stands barely 68 centimetres (27 inches) tall -- 10 times smaller than the former effigy, a scale, colour and irreverent pose completely at odds with the severity and grandiosity of socialist realism.

"Why so tiny? The goal was to cut the ideology down to size," said Maciej Mizian, an art historian at the local museum.

Nowa Huta, or "new steel mill" in Polish, was conceived by Soviet dictator Joseph Stalin as a model, industrial centre and counterweight to middle-class Krakow, the former seat of Polish kings and an important cultural, intellectual and religious hub.

Construction began in 1949 around a vast steel complex -- known as the Lenin Steel Mill -- whose presence made little economic sense: coal and iron ore had to be shipped in to feed the works.

"In contrast to the rest of the communist bloc, Poland only had two or three Lenin statues. In Czechoslovakia, East Germany and Hungary they were on every corner," Mizian told AFP.

"But the communists didn't want to anger Poles, being fully aware of their negative feelings towards the Russians."

Nowa Huta, too, was built with no monument to Lenin, but when foreign delegations visited they expressed surprise that a city with a steel mill named after the communist icon had no statue of him.

Bowing to pressure, former Polish Communist party chief Wladyslaw Gomulka "decided to erect one in the heart of the city, though it was quickly targeted by the town's residents," Mizian said.

Some sprinkled on a kind of liquid catnip that turned the statue into a feline toilet, others tried to blow it up -- though they only succeeded in damaging one of Lenin's heels.

When communism fell in 1989, Lenin statues across the Eastern bloc were toppled or, as in Nowa Huta, removed. The Nowa Huta work was sold to a Swedish businessman who installed it in his amusement park.

But Lenin statues remain a potent symbol of Russian influence and were again a battleground this past year, in Ukraine where dozens were taken down by anti-Moscow forces.

- A condom for good measure -

"I really like this new statue," said Krakow resident Bartek Taraba, a real estate agent in his 30s, adding: "It doesn't bring up any particular emotions in me.

"I never suffered, I was a little kid back then," he told AFP while snapping photos of the piece.

Artist Szydlowski said his work had generally drawn a good response, with residents hoping it would bring tourists, hence business to Nowa Huta.

But not everyone is happy, including 53-year-old Zbigniew Obrusik for whom it revived painful memories.

"It was by the Lenin statue that the ZOMO (communist riot police) beat us up during demonstrations held by Solidarity," he said, recalling the freedom-fighting trade union that helped bring down communism.

"It's still too soon for us to have a new Lenin in Nowa Huta."

Two local members of the country's conservative opposition Law and Justice (PiS) party stuck a condom on the statue, saying they wanted to prevent Lenin from disseminating communist ideology.

They also lodged a cmplaint against Szydlowski, accusing him of propagating communism -- a crime that carries a sentence of up to two years in prison in Poland.

When the arts festival ended last week, the little Lenin was moved out of the main square and next to a nearby theatre run by Szydlowski.

"Now it is safe and we hope it will remain there forever," he said.

Italian Potato Field Witnesses Unveiling Of Pope Statue
The first-ever statue of Pope Francis has been unveiled in a potato field near Naples. It is an ......