Polio Vaccines to be Used in Taliban Areas 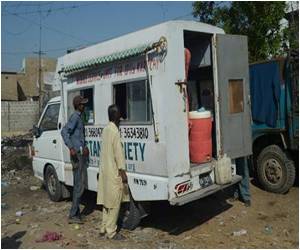 With a view to protect themselves against Taliban attacks, the Pakistani officials would being administering polio vaccines to children at security checkpoints in the country's lawless tribal belt.

The announcement was made at a ceremony to mark the launch of a three-day anti-polio campaign in the northwestern city of Peshawar, and is aimed at children from North Waziristan and other Taliban strongholds.

A group of Pakistani artists in the country's troubled tribal regions have come up with a novel way of attempting to change US drone operators' minds.
Advertisement

Farakh Sair Khan, a senior administrative official for the restive tribal areas, told the gathering the new strategy would "vaccinate children belonging to areas that are not accessible for the polio workers."


"North Waziristan is affected most by the polio virus and unfortunately we had not been able to vaccinate the children there for security reasons but we are trying to overcome it," Khan said.

The silence of Pakistan's Cholistan desert was broken by a souped-up 4x4 roar, clouds of dust and diesel fumes, cheered on by tens of thousands of spectators.
Advertisement
As many as 2643 polio teams will be participating in the campaign to vaccinate children under five, he added.

North Waziristan is a stronghold of Pakistan's most feared and ruthless fighters, including the Pakistani Taliban and Haqqani Network, and is virtually inaccessible due to the risk posed by internal clashes and targeted violence against outsiders.

"We will establish over 50 vaccination sites next to the checkpoints of security forces," said Shahdab Younis, an official of the UNICEF told AFP.

"Establishing these sites next to security checkpoints will minimise the risk of attacks," she added.

She said the move would also pressure parents -- many of whom believe polio drops are a Western ploy to sterilise Muslims -- into allowing their children to be vaccinated, due to the intimidating presence of armed troops.

"We have received 37 new cases of polio in the first three months of this year, 33 of them are from North Waziristan," Younis said.

"Polio vaccination was banned in North Waziristan since 2012 and the children there have not been vaccinated against polio since," she added.

Meanwhile, a separate official said talks had begun with the army, whose co-operation would be required.

"We are discussing it with the army because most of the security checkpoints belong to (them)," the official told AFP on condition of anonymity.

According to the World Health Organization, Pakistan recorded 91 cases of polio last year, up from 58 in 2012.

Pakistan's failure to defeat polio stands in stark contrast to its neighbour and great rival India, which recently celebrated the eradication of the disease three years after its last case.

Some 56 people including health workers and police officials providing security have been killed in militant attacks on polio vaccination teams in Pakistan since December 2012.

Militant groups such as the Pakistani Taliban oppose the immunisation drive, saying it is a cover for US spying.

Cricket Offers Hope for the Blind in Pakistan

In a country where disability is a major stigma, Pakistan's blind cricket captain Zeeshan Abbasi was once a shy and awkward child.
Advertisement
<< Key Driver of Colorectal Cancer Development and Progression...
Uncomplicated Acute Appendicitis in Kids can be Successfull... >>

Drug - Food Interactions How to Reduce School Bag Weight - Simple Tips Blood Pressure Calculator Diaphragmatic Hernia The Essence of Yoga A-Z Drug Brands in India Blood Donation - Recipients Indian Medical Journals Drug Side Effects Calculator Color Blindness Calculator
This site uses cookies to deliver our services.By using our site, you acknowledge that you have read and understand our Cookie Policy, Privacy Policy, and our Terms of Use  Ok, Got it. Close
×