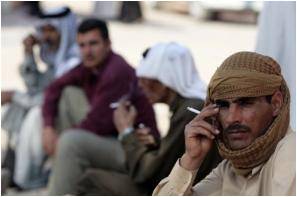 The Union Health Ministry revealed that it will be introducing a new policy against chewing smokeless tobacco which is being used by more than 25 percent of the population.

Speaking at the inauguration of a block at HSJ Institute of Dental Sciences and Hospital of Panjab University, health minister Ghulam Nabi Azad said that while the focus of the government's anti-tobacco programmes have been on cigarettes and beedis, the rising number of tobacco chewing population has forced his department to try and come up with a policy specific to chewing tobacco.

Azad said that while recent figures reveal around 35 percent of the population is using tobacco, less than 9 percent use cigarettes or beedis with nearly 26 percent chewing tobacco. According to the health minister, more than 80 percent of oral cancer cases occur due to chewing tobacco.

Tobacco use in women is on the rise. The health risks of tobacco are far too many has never done a woman any good psychologically or health-wise.
Advertisement
<< More on Revised Decision on Availability of Alzheimer's Dru...
Friendly Bacteria may Help in Fighting Flab >>