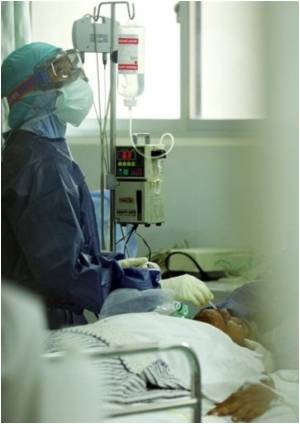 Nearly 3,000 police trainees have been quarantined at a Police Training College in the Malaysian capital of Kuala Lumpur after one of the trainees died due to influenza like symptoms.

Health authorities have rushed to the training centre where more than 2,000 trainees and almost 850 staff are being analyzed for any flu like symptoms. According to newspaper reports, around 31 cadets have been taken to a nearby hospital where they are being treated for their symptoms.

The training centre's commander Zulkifli Mohamed also said that over 400 trainees who were in direct contact with any of those affected by the adenovirus have been kept in separation with the remaining trainees.


"About 412 trainees who had been in direct contact with those affected by the adenovirus had been isolated in a separate area of the Pulapol complex", Zulkifli said, adding that the training center will only be opened after it receives clearance from the health ministry.

Swine flu, a type of influenza caused by a new strain of the H1N1 Type A influenza virus has originated from the pigs. Winter always brings along the chills and the flu, make sure you're safe this season.
Advertisement
<< Gene Linked to Peanut Allergy Identified
Discussions About Alcohol Age Limit >>

Reflux esophagitis is a condition causing inflammation of the lining of the esophagus. This happens when there is a upward movement of the acid from the stomach due to weakness of the esophageal sphincter.
Advertisement
News A-Z
A B C D E F G H I J K L M N O P Q R S T U V W X Y Z
What's New on Medindia