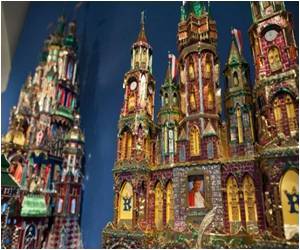 The best nativity scene contest in Poland's historic royal capital Krakow has drawn artists for generations, in a Christmas tradition which is one of the city's greatest moments.

The cribs are made entirely by hand, from a glittering rainbow of coloured aluminium foil, wood, cardboard, lace and in a sign of the times, using eco-friendly materials like beans, dried orange slices and bay leaves or as digital animations.

A lovely thing about Christmas is that it's compulsory, like a thunderstorm, and we all go through it together. - (Garrison Keillor) - a Christmas special report from Medindia.
Advertisement

The scenes which come in all sizes, are intricately detailed feats of small-scale engineering, capturing the hallmarks of Krakow's architecture and folklore, including an historic church bell tower, the Wawel royal castle and ancient city walls, mythical dragons and horsemen.


A Krakow-based engineer in precision mechanics, Leszek Zarzycki is entirely in his element when it comes to dreaming up and building these scenes, and at 57 has already won the competition grand prize 11 times.

Revelry and mirth is known by another name- Christmas! The fervor and festivity of Christmas is whetted as we submit wholly to the whims of our starving taste buds
Advertisement
"Each nativity scene has its own heart and soul, its own beauty. They may seem to look alike, but each one is different and unique. Each has its own magical charm, which delights and amazes. Each year we strive to make them even more beautiful," he told AFP.

Nativity scenes, cribs or creches, as they are also known, can measure up to two metres (6.5 feet) in height or be tiny miniatures.

Each year, the displays draw legions of visitors, including tourists from far afield who have never seen anything like it before.

"Fantastic, absolutely fantastic. We don't have anything like this in England. Nothing like it at all," chime Beryl Chetwynd and Trudy Hall, two British pensioners visiting Krakow.

"It's wonderful to keep up traditions," they added, noting Poland's Catholic heritage.

It was the Roman Catholic order of Franciscan friars who imported the tradition to Poland back in the 13th century.

Over time, Poles have made it their own by including national heroes like Polish-born Pope John Paul II or Nobel-winning physicist and chemist Maria Sklodowska-Curie in the scenes alongside angels, the baby Jesus, the Virgin Mary, Joseph and the Three Kings.

Current affairs are also woven into the Christmas tradition. The country?s presidency of the European Union or the upcoming Euro 2012 football championships which Poland will co-host with Ukraine got a nod this year.

This year, some marked the 30th anniversary of the brutal communist-era martial law crackdown by then president General Wojciech Jaruzelski on December 13, 1981 on the freedom-fighting Solidarity trade union.

Symbols of Polish patriotism including a white eagle and its red-and-white flag feature prominently in certain creches.

"Some nativity scenes are too political for me, they should really convey a religious message," says Anna-Marczyk Stankowski, 33, mother of the little Natalka who also made a creche for the children's competition.

School children participating in the special category make nearly half of the nativity scenes in the overall competition and are most fond of scenes including the legend of the dragon of Krakow's royal Wawel castle or the "Lajkonik" horseman, a folk character harking back to the 13th-century Mongol-Tatar invasion of Krakow.

Some nativity scenes hail from as far away as the United States, with Polish-Americans sending their entries to the competition as a way to keep up traditions.

And in the digital age, this much-loved custom is also entering cyberspace. Three years ago, competition organiser, the Krakow Historical Museum, launched a contest for the best digitally animated cyber-creche.

But veteran competitor Leszek Zarzycki isn't swayed by the novelty.

"A virtual nursery will never win with ours," which, he insists, work their own special Christmas magic on young and old alike.

Christmas is indeed a 'ubiquitous' festival, as it is celebrated throughout the world. The festivity of Christmas is resplendent in an estimated 26 million Indian homes. The joys of the season
Advertisement
<< Deadly Cancers may be Diagnosed by Simple Test
Conjoined Twin Does Not Survive After Surgery >>

1:55 Pm is the Happiest Time on Christmas Day