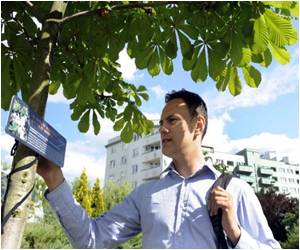 Poland's capital ground to a halt and tv and radio stations fell silent for 70 seconds as air-raid sirens wailed to mark seven decades since Polish insurgents launched the doomed Warsaw uprising against the Nazis.

Traffic halted and pedestrians stood in silent homage at 1500 GMT in memory of the nearly 200,000 mostly civilian victims of the 63-day insurrection launched on August 1, 1944 in a doomed bid to secure Poland's post war independence.

"The uprising broke out because there was no other way to avenge the humiliation, the camps, all the tragedy that was inflicted on Poland," veteran Bogdan Horoszowski told AFP at a wreath-laying ceremony at Warsaw's Tomb of the Unknown Soldier.


"We pay homage to the insurgents, knowing that the Warsaw Uprising paved the way to our peaceful transition to freedom 25 years ago," Warsaw mayor Hanna Gronkiewicz-Waltz said at the ceremony, referring to Poland's negotiated end to communism in 1989.
Advertisement
The uprising by Polish Home Army (AK) partisans is sometimes confused with the 1943 Warsaw Ghetto Uprising in which Jewish partisans imprisoned by the Nazis in an area of the Polish capital launched their own doomed insurgency.

In 1944, around 50,000 AK partisans, mostly young men and women in their late teens and early twenties, scouts and even children, took up arms against the Nazi Germans occupying the capital, as the Soviet Red Army was poised to invade it from the east.

Vastly better equipped, the Nazis slaughtered insurgents and civilians, many in aerial bombardments.

Sixty-three days of savage battles turned the capital into a smouldering heap of rubble.

What little was left standing was then razed on the orders of Adolf Hitler as the Nazis fled Soviet troops streaming into the city centre from the east bank of the Vistula river, where they had waited patiently for the Germans to crush the Polish resistance.

The uprising was aimed at securing Poland's post-war independence. The strategy was to eject German forces from Warsaw in order for Polish insurgents to gain control as the Soviet Red Army swept in with help from the east.

The battle is widely regarded as the most tragic in Poland's bloody and turbulent history, prompting sharp criticism among some Poles who saw it as a suicide mission, an act of utter desperation.

But for a new generation of Poles, it has become an unparallelled example of heroism.

Seventy years ago, "people my age were risking death so they could be free in our own country," boy scout Jakub Wojnowski, 16, told AFP as he stood guard in front of an monument dedicated to insurgents executed by the Nazis.

Source: AFP
Advertisement
<< Southwest America Played Host to a Bloody Era More Than 800...
Healthy Leisure and Being There for Family Key to Happine... >>

Rural Poland Sees A Rise In Allergies After Poland's Entry into EU
A new study suggests Poland's entry into the EU may have had the surprising consequence of ......

Nazi Defense Line in Poland Becomes Shelter for Bats
Europe's largest artificial roost, which is home to tens of thousands of bats, was once an ......

A Medal for 50 Years of Survival in Marriage in Poland
About two dozen couples hold champagne flutes at a Warsaw ceremony to receive a presidential medal ....