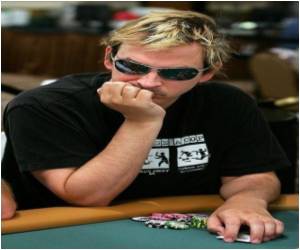 "Wow, 115 hours, I should have my head examined," said Laak, as the number appeared on the running clock on a laptop screen next to his seat at the Bellagio Hotel-Casino in Las Vegas. "I am definitely sick."

Poker is a Stress-Buster?

Playing poker might indeed be beneficial for your health after a study by Canadian researchers reveal that the popular card game could be an effective stress buster.
Advertisement

The 37-year-old pro began playing at 12:00 pm local time last Wednesday at the famous resort and quit at 7:00 am on Monday saying he still felt fine but didn't want to "do any more damage to my body than necessary."


He was permitted a five-minute break for every hour he played and could bank those for longer breaks. While he vowed he did not consume any caffeine or stimulants, he did manage at least one 30-minute nap.

The More Hands You Win, The More Money You Shell Out in Online Poker" Cornell Study

Counterintuitive as it may sound, but a new Cornell study of online poker has found that the more hands players win, the less money they're likely to collect - especially when it comes
Advertisement
Paperwork and video evidence to document Laak's feat is expected to be submitted this month to Guinness World Records, but it was witnessed live via a webcam by more than 130,000 people each day from more than 90 nations.

The previous official record, 72 hours and 2 minutes, was held by Larry Olmsted set at the Foxwood casino in 2004, but in poker circles the unofficial record -- not sanctioned by Guinness but still part of lore -- is Londoner Paul Zimbler's 78 hour, 45 minute stint last September.

Laak is the boyfriend of Academy Award nominee Jennifer Tilly, an actress who in recent years has also become a poker professional.

Laak promised to donate half his 6,766 dollars in winnings to Camp Sunshine, a Maine camp for children with life-threatening illnesses and their families. In addition, visitors to his blog, Twitter site and the webcam feed were encouraged to donate to the cause via text message.

Losing Huge Sums of Money in Poker? Your Bad Brainwaves Are the Real Culprit!

Your bad brainwaves is the real culprit behind losing a good amount of money in a game of poker,says a new study. So dont blame your stars.!
Advertisement
<< Going Mad About Football: Time for Some Myth-Busting
Ten Pct Of Web Users Reveal Too Much Personal Info Online >>

Accident and Trauma Care Diaphragmatic Hernia Post-Nasal Drip How to Reduce School Bag Weight - Simple Tips Calculate Ideal Weight for Infants Find a Hospital Iron Intake Calculator Pregnancy Confirmation Calculator Noscaphene (Noscapine) Indian Medical Journals
This site uses cookies to deliver our services.By using our site, you acknowledge that you have read and understand our Cookie Policy, Privacy Policy, and our Terms of Use  Ok, Got it. Close
×