Playing Paintball Can be More Dangerous Than Fun! 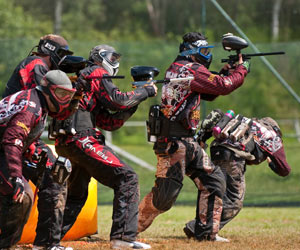 Players must wear protective masks to protect themselves. Though it is fun, several studies have reported cases of eye damage and health experts have warned about its related injuries to the face and eyes.

Effects of Sports-Specific Counseling on Injury Outcomes in Athletes

Athletes who receive occasional online counseling throughout the year to follow some simple training rules may actually reduce the future risk of injury.
Advertisement
‘A teenager suffered a ruptured liver after a pellet hit on his side while playing paintball. Therefore, always wear protective masks and play according to the sport guidelines to prevent organ injuries.’

But a new case reported in the journal BMJ found that a 18-year-old boy admitted in the emergency room of a hospital for symptoms of appendicitis had pooling of blood in the liver due to paintball.


The boy had been suffering from severe stomach pain and was suspected to have appendicitis. Doctors were forced to conduct an emergency surgery, but as they looked closer at his abdomen, they were shocked to see internal bleeding in the liver.

Concussions can be hard to diagnose as the symptoms may appear hours or days later and follow a sometimes unpredictable recovery pattern.
Advertisement
They immediately treated the patient and sent him home. But after three weeks he was readmitted due to pooling of blood in his liver. With further medical assistance, his body started to absorb the pooled blood.

When doctors enquired him, they found that the boy had played paintball with his friends a few days back and had been hit with a pellet on his lower abdomen.

Pellets can travel at a speed of 300 feet per second, potentially harming the place of contact. This velocity can lead to blindness and other possible organ damages.

Authors of the case study suggested that physicians must warn children and teenagers about the possible dangers associated with the sport.

A single season of contact sports in high school can result in brain changes among players regardless of clinical findings or concussion diagnosis.
Advertisement
<< Can Financial Incentives Help Quit Smoking During Pregnancy?
Norovirus Outbreak in British Cruise Ship Docked in the US >>

Kumitaiso is a group gymnastics class in which students work together to contort their bodies into human pyramids and towers, requiring medical treatment after taking part.

Selfie Addiction Calculator Find a Hospital Turmeric Powder - Health Benefits, Uses & Side Effects Iron Intake Calculator Diaphragmatic Hernia The Essence of Yoga Loram (2 mg) (Lorazepam) Drug Side Effects Calculator Color Blindness Calculator Post-Nasal Drip
This site uses cookies to deliver our services. By using our site, you acknowledge that you have read and understand our Cookie Policy, Privacy Policy, and our Terms of Use