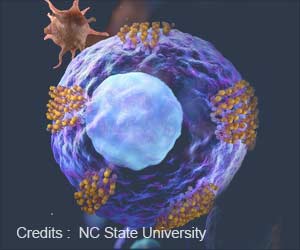 Platelets do more than blood-clotting and healing; recent research finds an important role of platelets in the immune system.

Research at the Universite Laval and Center Hospitalier Universitaire (CHU) de Quebec Research Centre finds that platelets may be the immune system's first response to antibodies.

Advertisement
‘It has long been believed that platelets are that component of blood whose only function is to stop bleeding. This research finds that theres more to the function of platelets than that: platelets are the immune systems first response to antibodies such as virus, bacteria, or allergens.’

This discovery opens the door to new ways to treat patients with septic shock caused by viral or bacterial infection as well as people with auto-immune diseases like rheumatoid arthritis and lupus.


When a foreign body enters the blood for the first time, it causes the formation of antibodies, explained Éric Boilard, lead author and professor at the Université Laval Faculty of Medicine. The next time these antibodies encounter the same foreign body, they quickly attach to its surface to form antigen-antibody complexes that trigger an inflammatory response.
Advertisement
Platelets have receptors that recognize these complexes, and this is what led Professor Boilard and his research partners to suspect that platelets were involved in the inflammatory process. To test their hypothesis, they created antigen-antibody complexes in the blood of mice using a virus, a bacterial toxin, and an allergenic protein.

The results were similar in all three cases. The mice showed the classic symptoms of septic or anaphylactic shock, namely, a drop in body temperature, tremors, impaired cardiac function, vasodilation, and loss of consciousness. "We repeated the tests on mice with almost all platelets removed and on mice with no antigen-antibody complex receptors on their platelets. These mice had no physiological response, which clearly demonstrates the key role of platelets in the process. Platelets, and not white blood cells, are first on the scene during an immune response," said the professor.

The researchers established that the mice went into shock because the platelets had released serotonin. "It's the same molecule as the neurotransmitter in the brain, but the molecule in the platelets is produced by cells in the intestine. Platelets store serotonin, they contain 90 percent of the body's entire serotonin supply, and release it in certain situations," Boilard explained.

One of the study's clinical implications is that platelet transfusion for patients in septic or anaphylactic shock could aggravate their condition by increasing the amount of serotonin in the blood. "Transfusion remains important, especially since those patients often show low platelet levels, but in order to prevent the problem the antigen-antibody complex receptors on the platelets should be blocked before transfusion," Boilard said.

Boilard is now researching the role of the antigen-antibody complex receptor in auto-immune diseases like arthritis and lupus. "We believe that by blocking the receptor, we should be able to improve a patient's condition without affecting everything else that platelets do," he noted.

The complete research is published in the journal Proceedings of the National Academy of Sciences (PNAS).

Bleeding Gums
Bleeding gums is a condition in which blood leaks from the gums and the spaces between the teeth. .....

Menorrhagia
Menorrhagia is a condition where a woman has menstrual periods that are heavy or prolonged and ......