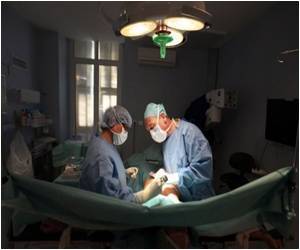 A father, an American cosmetic surgeon gave his own daughter a boob-job operation for her 18th birthday and does not regret his decision one bit.

Dr Michael Niccole, Medical Director of CosmetiCare in Newport Beach, California, also feels that his daughter Brittani was not too young to have implants.

"I don't think Brittani was too young to have implants. It's legal for people to have plastic surgery at that age," the Daily Mail quoted him as saying.


"Brittani has talked about getting a boob job since she was 16. She had small breasts, plus one side was bigger than the other but I told her she had to wait until she was 18.

Different stages of breast development in women and an in-depth look at the breast/bust and its structure.
Advertisement
"Brittani is beautiful. I've told her that from the moment she came into our lives as a baby. She was beautiful before the breast implants and she is beautiful now," he said.

However, he did say that if Brittani hadn't nagged him for the surgery he might not have done it.

On being asked if it was it unethical for a father to operate on his daughter he said, "Who in the world would give her as much attention, time and precision as her father?

"I have operated on family members over the years, including my wife," he said.

When Brittani's dad agreed to give her a boob job for her 18th birthday, the teenager was delighted.

She'd been nagging him for months, and despite her mum's reservations, he eventually agreed to it.

"In Orange County, everyone's into the way they look. I've seen a lot of girls my age - or even younger, like 16 - getting things fixed," she said of getting enhancement at 18.

The now 23-year-old also said that she didn't feel awkward about her father seeing her boobs, as he sees "100 breasts a day so another pair wouldn't matter".

"I'm comfortable about my body and I'm not shy about being nude. He saw me naked when I was a baby.

"He's my dad. He loves me. It was in a professional setting. There was nothing weird going on, as some think.

"The operation went perfectly. I didn't have to take any painkillers. I had a good recovery and three weeks later we were taking a holiday in the Bahamas.

"I have zero regrets about my decision. Some girls you know have fake breasts but people say mine are so natural looking. I think that they look perfect," she added.

Want firm and shapely breasts? Consider the option of traveling abroad to have it done at affordable prices.
Advertisement
<< Sense of Smell Enhanced by Anxiety
Stress Management for Breast Cancer Patients Can Impact Dise... >>