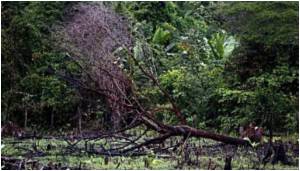 A mystery surrounding how plants have sex has been solved by a team of biologists from the University of Leicester.

The researchers have discovered a pair of proteins made by flowering plants that are vital for the production of the sperm present within each pollen grain.

A new study has claimed that feeding a growing global population while also slowing or reversing global deforestation can only happen if agricultural yields rise and/or per capita food consumption goes down over the next century.


The mystery of this 'double fertilization' process is how each single pollen grain is able to produce twin sperm cells.

This breakthrough study from the Twell Laboratory at the University of Leicester, published in the prestigious academic journal The Plant Cell, has found a pair of genes called DAZ1 and DAZ2 that are essential for making twin sperm cells. Plants with mutated versions of DAZ1 and DAZ2 produce pollen grains with a single sperm that is unable to fertilize.

The researchers show that DAZ1 and DAZ2 are controlled by the protein DUO1 that acts as a 'master switch' - so that DUO1 and the DAZ1/DAZ2 genes work in tandem to control a gene network that ensures a pair of fertile sperm is made inside each pollen grain.

Interestingly, DAZ1 and DAZ2 perform their role by cooperating with a well-known 'repressor' protein called TOPLESS that acts as a brake on unwanted gene activity that would otherwise halt sperm and seed production. Although TOPLESS has many roles in plants it has not previously been linked sperm production.

Professor David Twell at the University of Leicester's Department of Biology, who led the study, said: "We often take for granted sexual reproduction in plants and its role in our lives. It is a complex process that has been studied scientifically for over a century, but it is only recently that we are beginning to get a grip on the underlying mechanisms.

"We hope to use our discovery to decipher the origins of sexual reproduction and to further demystify the fascinating process - of how plants make the fertile sperm inside the pollen grains - that are essential for the vast majority of our food crop production."

Given their important role in male fertility, the discovery of DAZ1 and DAZ2 has the potential to be applied in the development of new plant breeding techniques to prevent the unwanted passing of genes - or 'horizontal gene transfer' - between crops or from crops to wild species.

This new knowledge also generates genetic tools and new ways of thinking about, and monitoring the effects of, environmental stresses on the reproductive process. In future such information may become increasingly important as we strive to breed superior crops that maintain yield in a changing climate.