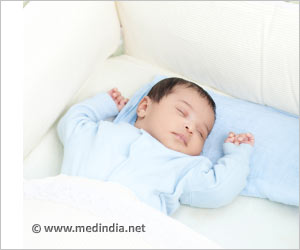 The study of 153,000 Australian children published in Pediatrics reports that overall, 9.6 percent of children were developmentally high risk. In particular, infants born following planned birth before the optimal time of birth were more likely to have poor child development.

This is mostly attributable to the increased use of elective caesarean section and induction of labour. Planned births occur where a considered decision is made to deliver an infant, and in recent years there have been significant changes in clinical practice resulting in an increase in planned births before the ideal time of birth at 39-40 weeks' gestation.

Nutrient rich supplemental donor milk did not improve neurodevelopment in very low birth weight infants.
Advertisement
‘The timing of planned birth is potentially modifiable, and the benefits of waiting should be communicated to clinicians, mothers and families.’
Tweet it Now

Steroid hormones and branched chain amino acids in the mother's urine are associated with greater fetal growth and increased birth weight.
Advertisement
Compared to children born vaginally following spontaneous labor, the combined adjusted relative risk of being 'developmentally high risk' was 26 percent higher for a planned birth at 37 weeks and 13 percent higher at 38 weeks. This is after taking account other important factors associated with poor child development such as socioeconomic disadvantage, lower maternal age, maternal smoking in pregnancy and fetal growth restriction.

"The timing of planned birth is potentially modifiable, and the benefits of waiting should be communicated to clinicians, mothers and families," says study co-author, Dr Jonathan Morris of the Kolling Institute and the University of Sydney.

The study's senior author, Associate Professor Natasha Nassar from the University of Sydney Menzies Centre for Health Policy said: "While the association between being born earlier - lower gestational age - and poorer developmental outcomes is well established, our results revealed that poor development is further exacerbated in the case of planned birth, where a considered decision made to deliver an infant determines gestational age.

"Significant changes in clinical practice have seen an increase in planned births before 39-40 completed weeks' gestation from an increased use of primary and repeat cesarean section and a greater use of labor induction. At a population level this has resulted in a decrease in modal gestational age with planned birth accounting for almost half of births before 39-40 weeks. It is of paramount importance to ensure there are no unintended harms from such a significant shift in clinical practice."

The study's lead author, Mr Jason Bentley from the Menzies Centre for Health Policy commented: "There is an urgent need for strategies to inform more judicious clinical decision making about the timing of planned birth." "In cases where labor occurs naturally before 39 weeks or planned birth is unavoidable, it is important that there are appropriate interventions and support in early childhood for these potentially vulnerable children."

Maternal Tdap Vaccination Not Associated With Microcephaly and Structural Birth

Administration of Tdap vaccine during pregnancy was not associated with increased risk for microcephaly for vaccinations occurring at less than 14 weeks' gestation.