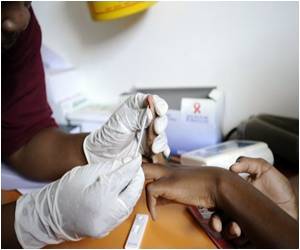 South African President Jacob Zuma on Thursday unveiled a plan to reduce the number of HIV infections into half over the next five years.

The five-year plan is the first drafted since the 2008 ouster of president Thabo Mbeki and his health minister Manto Tshabalala-Msimang, known as Dr Beetroot for advocating vegetables rather medication to treat AIDS.

Despite his own gaffes -- he once said he had showered to prevent HIV infection -- Zuma has dramatically expanded South Africa's AIDS treatment programme, which is the largest in the world serving 1.3 million people.


"We are steadily overcoming fear and confusion. We have overcome divisions. We have stopped making HIV and AIDS a battlefield on which to fight one another," Zuma said in a speech in the southern city of Port Elizabeth.

AIDS defining malignancies are cancers that occur in patients with AIDS due to their low immunity.
Advertisement
The new plan calls for stepped-up prevention efforts to halve new infections of HIV and tuberculosis by 2016 and to put 80 percent of eligible patients on anti-retroviral drugs to fight AIDS.

South Africa has 5.6 million people with HIV, in a population of 50 million, and the expanded treatment has already made gains in combating the epidemic.

The number of mothers who transmit HIV to their babies during childbirth has plunged, while the rate of new infections dropped by 22 percent during the last decade, with mortality dropping at a similar pace.

The number of nurses accredited to provide AIDS treatment also jumped from 290 to 10,542.

Over the last two years, South Africa has also made a greater push to offer testing services, with 13 million people taking HIV tests since April 2010, when a national testing campaign was launched.

Zuma made no mention of what the new plan will cost, but local media put the price tag at 131 billion rands ($16 billion, 12 billion euros).

AIDS activists, who were shunned by the Mbeki administration, welcomed the new plan, which was crafted after widespread consultations among civil society and health authorities.

"South Africa started the last plan with Manto Tshabalala-Msimang as the Minister of Health and Thabo Mbeki as president. Although the plan was adopted by the government, it was resisted by the minister," said the Treatment Action Campaign, which spearheaded efforts to force the government to provide to anti-retrovirals (ARVs).

"For several years the roll of ARVs was kept as slow as possible. Preventable infections and deaths continued," it said.

"Five years later, all that has changed. We have almost all the tools and policies to fight HIV and TB. What we need now is accountability for implementation."

Encyclopedia section of medindia explains in brief about the treatment for AIDS/HIV
Advertisement
<< Antioxidants Derived From Marigold Could Prevent Age-Relate...
Hot Chemo Baths Offer A Fresh Look In Cancer Fight >>

Turmeric Powder - Health Benefits, Uses & Side Effects Accident and Trauma Care Indian Medical Journals Daily Calorie Requirements Find a Doctor Blood Donation - Recipients Color Blindness Calculator Iron Intake Calculator Sinopril (2mg) (Lacidipine) The Essence of Yoga
This site uses cookies to deliver our services.By using our site, you acknowledge that you have read and understand our Cookie Policy, Privacy Policy, and our Terms of Use  Ok, Got it. Close
×