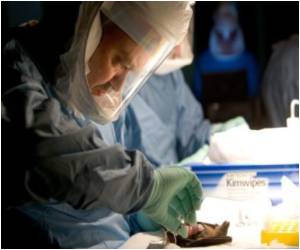 Northwestern Medicine scientists are unraveling the molecular changes that underlie one of the world's deadliest and most infamous respiratory infections.

When the bacterium Yersinia pestis enters the lungs, it causes pneumonic plague, a disease that is 100 percent fatal if untreated. The way in which Y. pestis evades the immune system and kills people in a matter of days has largely confounded scientists, until now.
Advertisement

Following a 2007 study demonstrating that the presence of a protein called the plasminogen activator protease (Pla) is required for Y. pestis to live inside the lungs, Wyndham Lathem, PhD, assistant professor in Microbiology-Immunology, has found what role Pla plays during disease.


The activator shuts down a molecule, Fas ligand (FasL), which stimulates a form of programmed cell death known as apoptosis. The result is a disrupted immune response during infection. This allows Y. pestis to overwhelm the lungs, causing death.
Advertisement
"This is the first time anyone has shown how bacteria can subvert apoptotic cell death by directly destroying Fas ligand," said Lathem, a member of the Center for Genetic Medicine and Interdepartmental Immunobiology Center.

The findings were published April 9 in Cell Host & Microbe.

To study its effects, scientists added Pla to glass slides with various fluorescently-tagged proteins. If the protease showed an affinity for a specific protein, it would chew off pieces, making it appear less florescent when viewed under a microscope.

"We knew that Pla must be chopping up host proteins in some manner and we looked to discover exactly what proteins were being affected," said first author Adam Caulfield, a research associate in Lathem's lab.

"As we reviewed possible hits, the 'aha moment' came when we saw Fas ligand on the list of affected proteins, because we know Fas is an integral receptor for controlling cell death," said Lathem. "The process of Pla degrading Fas ligand effectively prevents the lungs from being able to clear the infection."

"Now that we have identified this as a method by which plague bacteria can manipulate the immune system, we have something to look for when studying other respiratory infections," Lathem said. "This could be a common feature, where we see other bacteria manipulating cell death pathways by altering Fas signaling."

Pneumonic plague is unique in that it is the only type of plague with an ability to spread from person to person. It is treatable if caught early, but after 24 hours, antibiotics are rendered useless.

Lathem believes that a restoration of Fas signaling may give antibiotics more time to work, and scientists in his lab are exploring that possibility. They will also be looking at different bacterial infections to see if any manipulate cell death by altering Fas signaling in a similar manner.

Worries About Future Plague Speed Skating World
A rising number of countries have been losing interest in speed skating leading to worries about ......

DNA from the Ancient, Terrifying Plague may Lend Clues About Future Risks
Procopius penned down the events that occurred as a terrifying disease spread through ......

Plague Outbreak Kills 39 In Madagascar
In Madagascar, a plague spread by rats has killed 39 people in recent weeks, the health ministry ......

Delhi Hospitals Overflow With an Annual Plague of Dengue
Mohammad Awwal, a factory worker is gripped by fever, sweats and the sort of agonising aches that .....

Autophagy: Self-Repair Mechanism at Cellular Level
Autophagy, initiated by cellular stress and starvation is the cells self-repair mechanism and clean...