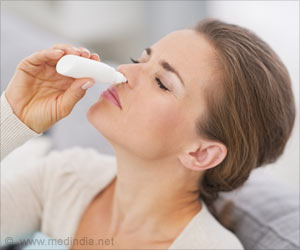 Patients admitted to the emergency departments are increasingly being administered medications through their nose. According to the paper by Loyola Medicine pharmacists, nasal administration is used as an alternative to injections or intravenous route.

The intranasal route "is easy, fast and noninvasive," emergency department pharmacist Megan A. Rech, PharmD, MS, and colleagues write in the journal Annals of Emergency Medicine.

Overall utilization of recommended intranasal steroid spray for chronic rhinosinusitis is being underused among the canadian population.
Advertisement
‘The intranasal route of medicine administration does not require needles, it is less painful, easy and non-invasive. It minimizes the spread of infectious diseases and ensures faster delivery of medication to the bloodstream.’

To administer a medication through the nose, a nurse or physician attaches a device called an atomizer to a syringe. The device then is placed in the patient's nostril. When the syringe plunger is pushed, a fine mist of medication covers the inside surface of the nose, providing a shortcut to the brain.


The intranasal route requires no needles, is less painful than IVs or injections and minimizes the spread of infectious diseases. For certain patients, including children, the elderly and the obese, the intranasal route also can deliver a medication to the bloodstream more quickly than an injection.

Mice with memory issues were able to remember the objects they had seen before in an object recognition test, after a dose of insulin in nasal cavity.
Advertisement
In some patients, IVs and injections are difficult to administer. A patient may be seizing or combative. An IV drug user may have collapsed veins. A child may be afraid of needles. A patient may be wearing multiple layers of clothes. Or it may be difficult and time consuming to obtain an intravenous line.

The review article by Rech and colleagues examined intranasal administration of five common medications used in emergency departments: midazolam (used to tranquilize and sedate children and treat seizures in children and adults); fentanyl (for pain relief); naloxone (for opioid overdoses); ketamine (to induce anesthesia) and dexmedetomidine (to sedate and relieve pain in children).

Previous research has found that, when administered intranasally, midazolam is effective for procedural sedation, anxiety and seizures and fentanyl is safe and effective for managing acute pain. The intranasal route also appears to be an effective alternative for naloxone for opioid overdose. The research to date is less clear on the roles for intranasal ketamine and dexmedetomidine.

The intranasal route has several disadvantages. It's more expensive than IVs and the dose may not be large enough, especially for adults. It cannot be used in certain situations, such as nasal defects or cocaine use that restricts blood vessels. It may irritate nasal membranes and leave an unpleasant taste in the back of the throat.

The paper is titled, "When to Pick the Nose: Out-of-Hospital and Emergency Department Intranasal Administration of Medications."

A joined study revealed that the number of emergency department visits by children could be reduced by half if the primary care office that they visit had evening office hours.
Advertisement
<< Corticosteroid Medications : Studying the Efficacy of Dexame...
Lack of Sleep in Depressed, Anxious Individuals Shuns the Po... >>

Medicaid Expansion Did Not Increase Emergency Department Use